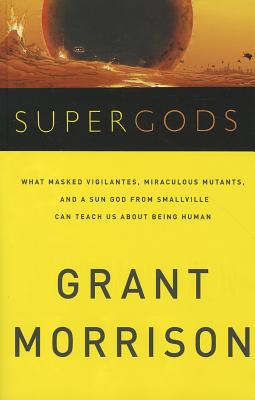 From one of the most acclaimed and profound writers in the world of comics comes a thrilling and provocative exploration of humankind’s great modern myth: the superhero

The first superhero comic ever published, Action Comics no. 1 in 1938, introduced the world to something both unprecedented and timeless: Superman, a caped god for the modern age. In a matter of years, the skies of the imaginary world were filled with strange mutants, aliens, and vigilantes: Batman, Wonder Woman, the Fantastic Four, Iron Man, and the X-Men—the list of names as familiar as our own. In less than a century, they’ve gone from not existing at all to being everywhere we look: on our movie and television screens, in our videogames and dreams. But what are they trying to tell us?

For Grant Morrison, arguably the greatest of contemporary chroniclers of the “superworld,” these heroes are powerful archetypes whose ongoing, decades-spanning story arcs reflect and predict the course of human existence: Through them we tell the story of ourselves, our troubled history, and our starry aspirations. In this exhilarating work of a lifetime, Morrison draws on art, science, mythology, and his own astonishing journeys through this shadow universe to provide the first true history of the superhero—why they matter, why they will always be with us, and what they tell us about who we are . . . and what we may yet become.

Grant Morrison is one of the most popular and acclaimed contemporary writers of any genre. His long list of credits as a comic-book writer include "JLA, New X-Men, Seven Soldiers, Animal Man, Doom Patrol, The Invisibles, We3, The Filth, "and "Batman: Arkham Asylum, "the bestselling original graphic novel of all time. He is also an award-winning playwright and screenwriter.

Praise For Supergods: What Masked Vigilantes, Miraculous Mutants, and a Sun God from Smallville Can Teach Us About Being Human…


"Grant Morrison is the antimatter to the often mundane world of comics - SUPERGODS is the finely tuned death-ray. Far beyond deconstruction, it exposes, challenges, invigorates and detonates everything we know about this modern mythology. SUPERGODS gives meaning to the fictional worlds we create and live within and helps us make sense of the madness within ourselves through the four-color world of the super hero." --Gerard Way, lead singer of My Chemical Romance and author of The Umbrella Academy.

"Morrison is ideally suited to the task of chronicling the glorious rise, fall, rise, fall and rise again of comic-book superheroes. As thorough an account of the superhero phenomenon as readers are likely to find, filled with unexpected insights and savvy pop-psych analysis. Those who dare enter will find the prose equivalent of a Morrison superhero tale: part perplexing, part weird, fully engrossing." --Kirkus

#1 in Wired's "10 Books That Will Fry Your Mind This Summer" "Grant Morrison has a hell of a tale to tell: The graphic novelist who co-created Batman's twisted game-changer Arkham Asylum: A Serious House on Serious Earth tripped on psilocybin mushrooms, fought movie execs to keep the Joker in high heels and reaped the benefits of going 50 hours without sleep in order to better access his unconscious. Subtitled What Masked Vigilantes, Miraculous Mutants, and a Sun God from Smallville Can Teach Us About Being Human, this trippy autobiography-cum-critical essay gathers up the deep thoughts and otherworldly hallucinations experienced by the comics writer." --Wired.com

NPR's "Summer High Fliers" "Grant Morrison is one of the world's leading experts on comic books, and he draws on his entire body of work in Supergods, charting the history of superheroes from the very beginning. Morrison places the figures we all know -- Superman, Spider-Man, the X-Men -- in a broad cultural context, invoking art history, science and mythology to explain why we are so fascinated by the superhuman." --NPR.org

“Grant Morrison is one of the great comics writers of all time. I wish I didn’t have to compete with someone as good as him.”—Stan Lee

“I suddenly realized that everything that I’m trying to say in my nonfiction work, and in some of my fiction work, had been so beautifully and so imaginatively expressed in the work of Grant Morrison.”—Deepak Chopra