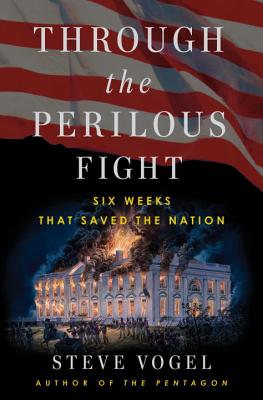 Through the Perilous Fight

Six Weeks That Saved the Nation

In a rousing account of one of the critical turning points in American history, "Through the Perilous Fight" tells the gripping story of the burning of Washington and the improbable last stand at Baltimore that helped save the nation and inspired its National Anthem.
In the summer of 1814, the United States of America teetered on the brink of disaster. The war it had declared against Great Britain two years earlier appeared headed toward inglorious American defeat. The young nation's most implacable nemesis, the ruthless British Admiral George Cockburn, launched an invasion of Washington in a daring attempt to decapitate the government and crush the American spirit. The British succeeded spectacularly, burning down most of the city's landmarks--including the White House and the Capitol--and driving President James Madison from the area. As looters ransacked federal buildings and panic gripped the citizens of Washington, beleaguered American forces were forced to regroup for a last-ditch defense of Baltimore. The outcome of that "perilous fight" would help change the outcome of the war--and with it, the fate of the fledgling American republic.
In a fast-paced, character-driven narrative, Steve Vogel tells the story of this titanic struggle from the perspective of both sides. Like an epic novel, "Through the Perilous Fight" abounds with heroes, villains, and astounding feats of derring-do. The vindictive Cockburn emerges from these pages as a pioneer in the art of total warfare, ordering his men to "knock down, burn, and destroy" everything in their path. While President Madison dithers on how to protect the capital, Secretary of State James Monroe personally organizes the American defenses, with disastrous results. Meanwhile, a prominent Washington lawyer named Francis Scott Key embarks on a mission of mercy to negotiate the release of an American prisoner. His journey will place him with the British fleet during the climactic Battle for Baltimore, and culminate in the creation of one of the most enduring compositions in the annals of patriotic song: "The Star-Spangled Banner."
Like Pearl Harbor or 9/11, the burning of Washington was a devastating national tragedy that ultimately united America and renewed its sense of purpose. "Through the Perilous Fight" combines bravura storytelling with brilliantly rendered character sketches to recreate the thrilling six-week period when Americans rallied from the ashes to overcome their oldest adversary--and win themselves a new birth of freedom.
Praise for "Through the Perilous Fight
"
"Very fine storytelling, impeccably researched . . . brings to life the fraught events of 1814 with compelling and convincing vigor."--Rick Atkinson, Pulitzer Prize-winning author of "An Army at Dawn"
" "
"Probably the best piece of military history that I have read or reviewed in the past five years. . . . This well-researched and superbly written history has all the trappings of a good novel. . . . No one who hears the national anthem at a ballgame will ever think of it the same way after reading this book."--Gary Anderson, "The Washington Times"
" Steve] Vogel does a superb job. . . . A] fast-paced narrative with lively vignettes."--Joyce Appleby, "The Washington Post"
" "
"Before 9/11 was 1814, the year the enemy burned the nation's capital. . . . A splendid account of the uncertainty, the peril, and the valor of those days."--Richard Brookhiser, author of" James Madison"
" "
"A swift, vibrant account of the accidents, intricacies and insanities of war."--"Kirkus Reviews.


Praise For Through the Perilous Fight: Six Weeks That Saved the Nation…

“[A] fine study . . . Steve Vogel does a superb job of bringing this woeful tale to life. He leavens his fast-paced narrative with lively vignettes of the principal participants. . . . Vogel meticulously sets the stage for the ensuing debacle.”—Joyce Appleby, The Washington Post

“The Perilous Fight is probably the best piece of military history that I have read or reviewed in the past five years. . . . This well-researched and superbly written history has all the trappings of a good novel. There is great heroism, treacherous self-interest, cowardice and intrigue. . . . No one who hears the national anthem at a ballgame will ever think of it the same way after reading this book, nor want the national anthem changed.”—Gary Anderson, The Washington Times

“Complementing Donald R. Hickey’s War of 1812 and Alan Taylor’s The Civil War of 1812, this title will contribute to making this war no longer one of our ‘forgotten’ conflicts.”—Library Journal

“Vogel . . . superbly dramatizes a campaign whose legacy is ‘The Star-Spangled Banner,’ both the anthem and the flag for which it stands, today displayed in Washington.”—Booklist

“The experienced author knows how to write about the military and its human and martial conflicts. . . . A swift, vibrant account of the accidents, intricacies and insanities of war.”—Kirkus Reviews

“Very fine storytelling, impeccably researched . . . Through the Perilous Fight brings to life the fraught events of 1814 with compelling and convincing vigor.”—Rick Atkinson, Pulitzer Prize–winning author of An Army at Dawn

“Before 9/11 was 1814—the year the enemy burned the nation’s capital. Steve Vogel gives a splendid account, fast-paced and detailed, of the uncertainty, the peril, and the valor of those days.”—Richard Brookhiser, author of James Madison

“The War of 1812 remains one of the most important and least appreciated events in American history. In these engaging pages, Steve Vogel does much to rectify that, telling the story of a critical episode of the conflict with eloquence and insight.”—Jon Meacham, Pulitzer Prize–winning author of Thomas Jefferson: The Art of Power

Steve Vogel is the author of "The Pentagon" and a veteran national reporter for "The Washington Post." He has written extensively about military affairs and the treatment of veterans from the wars in Afghanistan and Iraq. His reporting on the war in Afghanistan was part of a package of "Washington""Post "stories selected as a finalist for the 2002 Pulitzer Prize. Vogel covered the September 11 terrorist attack on the Pentagon, and the building's subsequent reconstruction. He covered the war in Iraq and the first Gulf War, as well as U.S. military operations in Rwanda, Somalia, and the Balkans. A graduate of the College of William and Mary, Vogel received a master's degree in international public policy from the Johns Hopkins School of Advanced International Studies.