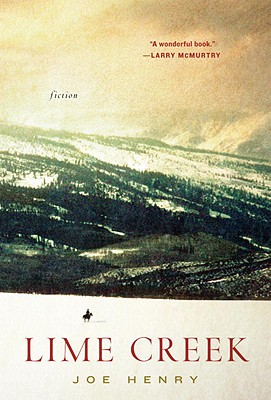 In this wonderful work of fiction, Joe Henry explores the complex relationship between a father and his sons, whose deep connections to one another, to the land, and to the creatures that inhabit it give meaning to their lives.

Spencer Davis, his wife, Elizabeth, and their sons, Luke, Whitney, and Lonny, work with horses and with their hands. They spend long relentless days cutting summer hay and feeding it to their cattle through fierce Wyoming winters. The family bears witness to the cycle of life, bringing foals into the world and deciding when to let a favored mare pass on to the next. As Luke grows older, falls in love, and begins to assert his independence, Spencer strives to impart the wisdom of this way of life to his headstrong son, whatever the cost.

Moving, powerful, and beautifully rendered, Lime Creek brings readers into the lives of this unforgettable family and into a world that, though often harsh, is lit by flashes of spectacular grace.

“[A] remarkable work….told in heart-wrenchingly beautiful prose….Brief but brilliant in the spirit of Paul Harding’s Tinkers.”
--Library Journal, starred review

“Lime Creek is a wonderful book, subtle in texture, rich in sorrow.  I hope it gets the readers it deserves.”
--Larry McMurtry, author of Lonesome Dove

“These are beautiful stories, bravely written, and at their best, intoxicating. Word by careful word, Joe Henry shows us a world, as experienced by these Wyoming ranchers, that is both ravishing and terrible in equal measure--and hardly bounded by human experience. Though the prose brings Faulkner to mind, I found myself thinking of Lime Creek as a kind of Dubliners for Wyoming.”
--David Wroblewski, author of The Story of Edgar Sawtelle

“Like water, like shelter, Lime Creek is the kind of story readers not only want, but need.  Joe Henry brings us an extended family of people and horses, terrible winters and beautiful land.  Moving and lyrical, with a strong, honest spine, Lime Creek is a gift to readers.”
--Amy Bloom, author of Where the God of Love Hangs Out


“Spare but inordinately rich, Lime Creek will remind you of what literature is supposed to be, and do.”
—Elizabeth Berg, author of Once Upon a Time, There Was You

Joe Henry received his MFA from the University of Iowa Writers' Workshop, but he attributes much of his learning to his many years as a laborer, rancher and professional athlete. A renowned lyricist, he has had his words performed on more than a hundred recordings by artists ranging from Frank Sinatra and John Denver to Garth Brooks and Rascal Flatts. In addition to his many music awards, Henry also received a National Conservation Achievement Award from the National Wildlife Federation "for the celebration of the natural world in his work" and the Colorado Governor's Award for Excellence in the Arts. This is his first work of fiction.
Loading...
or
Not Currently Available for Direct Purchase