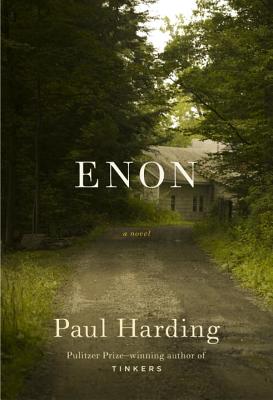 “Charlie Crosby has to face what no parent should ever have to-the death of their child. Enon is the town where Charlie and his wife, Susan, and daughter, Kate, live until one September day Kate is run over while riding her bike home from the beach. Kate's birth had bound Charlie and Susan back together and according to Susan was suppose to make them both better people. What now? How does any parent survive the death of a child? Charlie will travel a tormented road of sorrow, grief, anger, hopelessness and the big question, why? Paul Harding pulls no punches when describing Charlie's life after Kate's death. A moving meditation including the history of Enon, the seasons of New England and the mysteries of life. Profound, powerful and heart-breaking. Not to be missed.”
— Karen Briggs, Great Northern Books and Hobbies, Oscoda, MI
View the List

NAMED ONE OF THE BEST NOVELS OF THE YEAR BY
"The Wall Street Journal - "American Library Association" - Kirkus Reviews"
A stunning allegorical novel about one man's enduring love for his daughter
Hailed as "a masterpiece" (NPR), "Tinkers, "Paul Harding's Pulitzer Prize-winning debut, is a modern classic. "The Dallas Morning News" observed that "like Faulkner, Harding never shies away from describing what seems impossible to put into words." Here, in "Enon, " Harding follows a year in the life of Charlie Crosby as he tries to come to terms with a shattering personal tragedy. Grandson of George Crosby (the protagonist of "Tinkers"), Charlie inhabits the same dynamic landscape of New England, its seasons mirroring his turbulent emotional odyssey. Along the way, Charlie's encounters are brought to life by his wit, his insights into history, and his yearning to understand the big questions. A stunning mosaic of human experience, "Enon" affirms Paul Harding as one of the most gifted and profound writers of his generation.
Praise for "Enon"
"Harding conveys the common but powerful bond of parental love with devastating accuracy. . . . He] is a major voice in American fiction."--"Chicago Tribune "
"Paul Harding's novel "Tinkers "won the Pulitzer Prize; its stunning successor, "Enon, "only raises the bar."--"O: The Oprah Magazine"
"Extraordinary . . . a darkly intoxicating read . . . Harding's] prose is steeped in a visionary, transcendentalist tradition that echoes Blake, Rilke, Emerson, and Thoreau."--"The New Yorker"
" "
"So wild and riveting it's practically an aria . . . Harding is a superb stylist."--"Entertainment Weekly"
" Charlie's grief], shaped by a gifted writer's caressing attention, can bring about moments of what Charlie calls 'brokenhearted joy.'"--"The Wall Street Journal"
" "
"Astonishing . . . a work of fiction that feels authentic as memoir."--"Financial Times"
"Read "Enon" to live longer in the harsh, gorgeous atmosphere that Paul Harding has created."--"San Francisco Chronicle.

Paul Harding is the author of the novel "Tinkers, "which won the 2010 Pulitzer Prize for Fiction. He has received a Guggenheim Fellowship and the PEN/Robert Bingham Fellowship for Writers. He was a fiction fellow at the Fine Arts Work Center in Provincetown, Massachusetts, and has taught at the Iowa Writers' Workshop, Harvard University, and Grinnell College.

“An extraordinary follow-up to the author’s Pulitzer Prize–winning debut . . . Harding’s subject is consciousness rooted in a contemporary moment but bound to a Puritan past. His prose is steeped in a visionary, transcendentalist tradition that echoes Blake, Rilke, Emerson, and Thoreau, and makes for a darkly intoxicating read.”—The New Yorker

“So wild and riveting it’s practically an aria . . . Harding is a superb stylist.”—Entertainment Weekly

“Without blurring the sharply lucid nightmares and recollections, Mr. Harding pushes Charlie’s madness to a crisis point of destruction or renewal. The journey to the depths of his grief is unforgettably stark and sad. But that sadness, shaped by a gifted writer’s caressing attention, can also bring about moments of what Charlie calls ‘brokenhearted joy.’”—The Wall Street Journal

“Harding is an extraordinary writer, for the intoxicating power of his prose, the range of his imagination, and above all for the redemptive humanity of his vision. With painstaking brilliance, Enon charts one man’s attempt to salvage meaning from meaningless tragedy, to endure the ubiquitous presence of a loved one’s absence. A superb account of the banality and uniqueness of bereavement, it more than earns its place alongside such non-fictional classics as Joan Didion’s The Year of Magical Thinking and CS Lewis’s A Grief Observed. That Enon is a work of fiction that feels authentic as memoir makes it all the more astonishing.”—Rebecca Abrams, Financial Times

“Enon is Joan Didion’s Blue Nights on major meds. . . . Time was the subject of Tinkers as grief is the subject of Enon. The two are related, like father and sons. Read Enon to live longer in the harsh, gorgeous atmosphere that Paul Harding has created.”—San Francisco Chronicle

“Paul Harding’s excellent second novel . . . is a lovely book about grief, the ways in which we punish ourselves for feeling it, and, ultimately, how we rebuild our lives even when they seem unsalvageable.”—New York Daily News

“Harding’s mythic sensibility, soaring empathy for his devastated yet life-loving protagonist, comedic embrace of the absurd, and exquisite receptivity to the beauty and treachery of the living world make for one astonishingly daring, gripping, and darkly resplendent novel of all-out grief and crawling-from-the-ruins survival.”—Booklist (starred review)

“Drawing upon the same New England landscape and family as his Pulitzer Prize–winning debut Tinkers, Harding deftly captures loss and its consequences in this gorgeous and haunting follow-up. . . . Offering an elegiac portrait of a severed family and the town of Enon itself, Harding’s second novel again proves he’s a contemporary master and one of our most important writers.”—Publishers Weekly (starred review)

“As Charlie’s grief reaches its apex, he’s consumed by dark visions, and Harding’s skillful whipsawing of the reader from the surreal to the quotidian is the best writing he’s done.”—Kirkus Reviews (starred review)