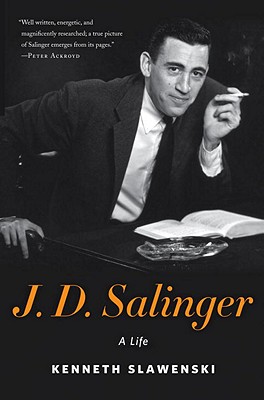 One of the most popular and mysterious figures in American literary history, author of the classic Catcher in the Rye, J. D. Salinger eluded fans and journalists for most of his life. Now comes a new biography that Peter Ackroyd in The Times of London calls “energetic and magnificently researched”—a book from which “a true picture of Salinger emerges.” Filled with new information and revelations—garnered from countless interviews, letters, and public records—J. D. Salinger presents an extraordinary life that spanned nearly the entire twentieth century.

Kenneth Slawenski explores Salinger’s privileged youth, long obscured by misrepresentation and rumor, revealing the brilliant, sarcastic, vulnerable son of a disapproving father and doting mother and his entrance into a social world where Gloria Vanderbilt dismissively referred to him as “a Jewish boy from New York.” Here too are accounts of Salinger’s first broken heart—Eugene O’Neill’s daughter, Oona, left him for the much older Charlie Chaplin—and the devastating World War II service (“a living hell”) of which he never spoke and which haunted him forever.

J. D. Salinger features all the dazzle of this author’s early writing successes, his dramatic encounters with luminaries from Ernest Hemingway to Laurence Olivier to Elia Kazan, his surprising office intrigues with famous New Yorker editors and writers, and the stunning triumph of The Catcher in the Rye, which would both make him world-famous and hasten his retreat into the hills of New Hampshire.

Whether it’s revealing the facts of his hasty, short-lived first marriage or his lifelong commitment to Eastern religion, which would dictate his attitudes toward sex, nutrition, solitude, and creativity, J. D. Salinger is this unique author’s unforgettable story in full—one that no lover of literature can afford to miss.

Praise from the U.K. for Salinger: A Life

“A first-rate book which is especially good on the links between Salinger’s fictions and their thematic developments . . . The passages on Salinger’s own war show that Slawenski can be an excellent storyteller himself, as he follows his subject through the thick of the horrors from D-Day to the Battle of the Bulge.”—The Daily Telegraph

“Slawenski sets about his task with such unblushing love and zest that his book is as irresistible to me as Salinger himself. . . .  Slawenski has a priceless humility and a sympathy with his subject which is unstinting though not unqualified. As a result, I think you get from him a rather better idea of what Salinger was really like and why he lived his life as he did than you might from a biography which is licensed to describe itself as ‘scholarly’ or ‘authorised.’ . . . If you can imagine Salinger having a soft spot for any book about him . . . then Slawenski’s might be the one.”—The Spectator

“Diligent, respectful, resolute in its refusal to include gossip, always ready to acknowledge the point at which evidence ends and speculation begins.”—The Mail on Sunday

Kenneth Slawenski is the creator of DeadCaulfields.com, a website founded in 2004 and recommended by "The New York Times." He has been working on this biography for eight years. Slawenski was born in New Jersey, and has lived there all his life.