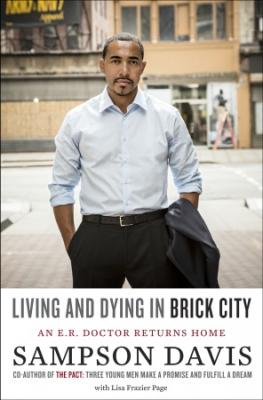 A riveting personal exploration of the healthcare crisis facing inner-city communities, written by an emergency room physician who grew up in the very neighborhood he is now serving Sampson Davis is best known as one of three friends from inner-city Newark who made a pact in high school to become doctors. Their book The Pact and their work through the Three Doctors Foundation have inspired countless young men and women to strive for goals they otherwise would not have dreamed they could attain. In this book, Dr. Davis looks at the healthcare crisis in the inner city from a rare perspective: as a doctor who works on the front line of emergency medical care in the community where he grew up, and as a member of that community who has faced the same challenges as the people he treats every day. He also offers invaluable practical advice for those living in such communities, where conditions like asthma, heart disease, stroke, obesity, and AIDS are disproportionately endemic. Dr. Davis's sister, a drug addict, died of AIDS; his brother is now paralyzed and confined to a wheelchair as a result of a bar fight; and he himself did time in juvenile detention-a wake-up call that changed his life. He recounts recognizing a young man who is brought to the E.R. with critical gunshot wounds as someone who was arrested with him when he was a teenager during a robbery gone bad; describes a patient whose case of sickle-cell anemia rouses an ethical dilemma; and explains the difficulty he has convincing his landlord and friend, an older woman, to go to the hospital for much-needed treatment. With empathy and hard-earned wisdom, Living and Dying in Brick City presents an urgent picture of medical care in our cities. It is an important resource guide for anyone at risk, anyone close to those at risk, and anyone who cares about the fate of our cities.

Sampson Davis was born and raised in Newark, New Jersey. He is a board certified emergency medicine physician and author of the" New York Times" bestsellers "The Pact, We Beat the Street, "and "The Bond. "He is the youngest physician to receive the National Medical Association's highest honor, the Scroll of Merit. He is a recipient of Essence and BET humanitarian awards and was named by "Essence" as one of the forty most inspirational African Americans. He is a founder of the Three Doctors Foundation and practices medicine in New Jersey.

Praise For Living and Dying in Brick City: An E.R. Doctor Returns Home…

“A pull-no-punches look at health care from a seldom-heard sector . . . Living and Dying isn’t a sky-is-falling chronicle. It’s a real, gutsy view of a city hospital.”—Essence

“Gripping . . . a prescription to help kids dream bigger than their circumstances, from someone who really knows.”—People

“[Dr. Davis] is really a local hero. His story has inspired so many of our young people, and he’s got his finger on the pulse of what is a challenge in Newark, and frankly all across America. . . . I think his book is going to make a big impact.”—Cory Booker

“Some memoirs are heartfelt, some are informative and some are even important. Few, however, are all three. . . . As rare as it is for a book to be heartfelt, well written and inspirational, it’s even rarer for a critic to say that a book should be required reading. This ought to be included in high school curricula—for the kids in the suburbs who have no idea what life is like in the inner cities, and for the kids in the inner cities to know that there is a way out.”—The Star-Ledger

“This is one of the best books I have read in a long time. Sampson Davis’s personal story is powerful, and his experiences in the ER room underscore the lack of effective health care in our underserved communities. Newark is lucky to have him as a citizen, and we are all lucky that he has shared his insights and expertise with us in Living and Dying in Brick City. His is an important voice in the conversation on health care in this country.”—Wes Moore, author of The Other Wes Moore

“This book just might save your life. Sampson Davis shares fascinating stories from the E.R. and addresses the inner-city health crisis. His book is an important investment in your most valuable resource: your health.”—Suze Orman, author of The Money Class

“This book is living proof that behind the boarded-up windows of one of America’s most neglected cities, beyond the sorrow and the pain, there is much more than we’ve come to expect. There is hope. There is change. There is redemption for Brick City. The book will open your eyes to a part of the world that most of us only see from behind the wheel of a tightly locked car. Sampson Davis is not afraid to lift heavy objects in this world. I’m glad he shared his journey with us, so that we know it is possible.”—James McBride, author of The Color of Water

“Living and Dying in Brick City provides a fascinating look at the interesting but often terrifying life of a medical professional in a tough inner-city hospital. More importantly it provides excellent and very practical advice about healthcare issues that are relevant to people of every socioeconomic group. It is entertaining while being helpful.” —Benjamin S. Carson Sr., MD, The Benjamin S Carson Sr MD and Dr Evelyn Spiro RN Professor and Director of Pediatric Neurosurgery, The Johns Hopkins Medical Institutions