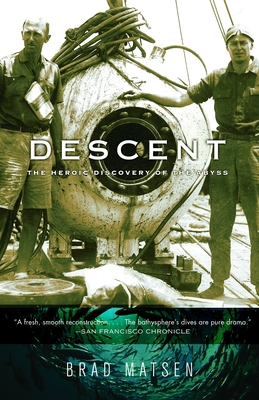 The Heroic Discovery of the Abyss

In Descent: The Heroic Discovery of the Abyss, Brad Matsen brings to vivid life the famous deep-sea expeditions of Otis Barton and William Beebe. Beebe was a very well-connected and internationally acclaimed naturalist, with the power to generate media attention. Barton was an engineer and heir to a considerable fortune, who had long dreamed of making his mark on the world as an adventurer. Together, Beebe and Barton would achieve what no one had done before--direct observation of life in the blackness of the abyss. Here, against the back drop of the depression, is their riveting tale.

Bradford Matsen has been writing about the sea and its inhabitants for twenty-five years in books, film scripts, essays, and magazine articles. Among his books are Planet Ocean: A Story of Life the Sea, and Dancing to the Fossil Record; Shocking Fish Tales; and Fishing Up North, and he is the author of the award-winning Incredible Ocean Adventure series for children. He was a creative producer for the Shape of Life, an eight-hour National Geographic/Sea Studios television series on evolution that aired on PBS in April 2002, and wrote the accompanying book of the same name. Matsen has written on marine science and environmental topics for Mother Jones, Audubon, Natural History, and many other magazines. His coverage of depleted ocean resources in Mother Jones, "Blues In the Key of Sea," won the Project Censored Award as one of the ten best stories of 1999. His essays have been included in Book of the Tongass as part of the influential Literature for a Land Ethic series, the Smithsonian Institution's Ocean Planet, and other anthologies. He lives in Seattle and New York.

Praise For Descent: The Heroic Discovery of the Abyss…

“The sensational exploits of Beebe and Barton and the bathysphere kept Americans on the edges of their seats in the 1930s, and, as Brad Matsen proves in Descent, they can still deliver a thrill.” —The New York Times

“[Matsen is a] master storyteller. . . . You’ll be well rewarded in reading this work.” —Decatur Daily
or
Not Currently Available for Direct Purchase
Copyright © 2020 American Booksellers Association