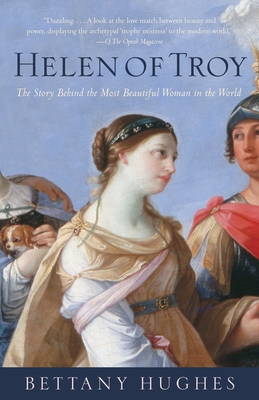 The Story Behind the Most Beautiful Woman in the World

For 3,000 years, the woman known as Helen of Troy has been both the ideal symbol of beauty and a reminder of the terrible power beauty can wield.In her search for the identity behind this mythic figure, acclaimed historian Bettany Hughes uses Homer’s account of Helen’s life to frame her own investigation. Tracing the cultural impact that Helen has had on both the ancient world and Western civilization, Hughes explores Helen’s role and representations in literature and in art throughout the ages. This is a masterly work of historical inquiry about one of the world’s most famous women.

Praise For Helen of Troy: The Story Behind the Most Beautiful Woman in the World…

“Dazzling. . . A look at the love match between beauty and power, displaying the archetypal ‘trophy mistress” to the modern world.” –O, The Oprah Magazine

“A divine biography. . . . Sizzling. . . . [Hughes] , a young British historian, explores not only the Bronze Age babe but also what she has meant throughout history and the cultural significance of being both desired and despised.” –USA Today

“Hughes brings a passion for ancient history and archaeology crossed with a strain of feminism to the figure of Helen.” –The Washington Post Book World

“The book triumphantly reclaims Helen from some of her traducers. Hughes’s portrait is as close to a real, living Helen as we are likely to get.”
–Financial Times

“When Helen launched her “thousand ships,” was she a “shameless hussy?” Or, like her mother, was she a rape victim? . . . The answers have always depended on who you speak to and when. Hughes has them all.”
–The Times

“Hughes skillfully brings this period back to life. A fascinating window onto the power politics of an age . . . a genuinely exciting historical narrative.”
–Sunday Telegraph.

Bettany Hughes is a cultural and social historian, writer, and television presenter. She received degrees in ancient and medieval history at Oxford University and has carried out research in the Balkans, Greece, and Asia Minor. She has presented numerous documentaries and historical series for the BBC, PBS, and the Discovery Channel, and also writes pieces on popular history for several newspapers and magazines.
Loading...
or support indie stores by buying on