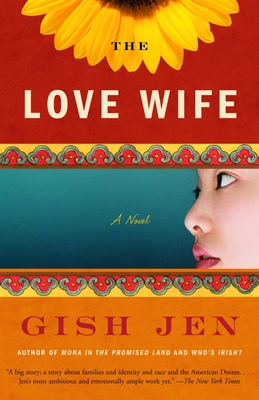 From the massively talented Gish Jen comes a barbed, moving, and stylistically dazzling new novel about the elusive nature of kinship. The Wongs describe themselves as a “half half” family, but the actual fractions are more complicated, given Carnegie’s Chinese heritage, his wife Blondie’s WASP background, and the various ethnic permutations of their adopted and biological children. Into this new American family comes a volatile new member.Her name is Lanlan. She is Carnegie’s Mainland Chinese relative, a tough, surprisingly lovely survivor of the Cultural Revolution, who comes courtesy of Carnegie’s mother’s will. Is Lanlan a very good nanny, a heartless climber, or a posthumous gift from a formidable mother who never stopped wanting her son to marry a nice Chinese girl? Rich in insight, buoyed by humor, The Love Wife is a hugely satisfying work.

“A big story: a story about families and identity and race and the American Dream. . . . Jen’s most ambitious and emotionally ample work yet.” –The New York Times“Vibrant, vital. . . . Wise and compassionate, The Love Wife unflinchingly probes the ties that bind–and separate–people, races and nations.” –People“A feast of gab, of proclamation and rebuttal, some of the quirkiest, funniest, most intelligent fictional talk in years.” –Newsday“A lush, funny, yet deeply moving novel of family and identity, a wondrous swoosh of a story.” –The Philadelphia Inquirer

Gish Jen is the author of two previous novels and a book of stories. Her honors include the Lannan Award for Fiction and the Strauss Living Award from the American Academy of Arts and Letters. She lives with her husband and two children in Cambridge, Massachusetts.

Gish Jen’s Who’s Irish? and Mona in the Promised Land are available in Vintage paperback.