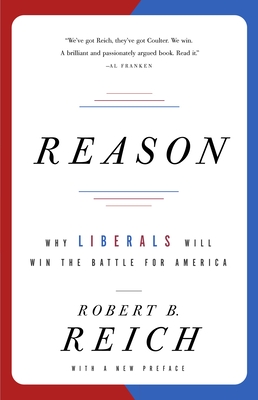 Why Liberals Will Win the Battle for America

For anyone who believes that liberal isn’t a dirty word but a term of honor, this book will be as revitalizing as oxygen. For in the pages of Reason, one of our most incisive public thinkers, and a former secretary of labor mounts a defense of classical liberalism that’s also a guide for rolling back twenty years of radical conservative domination of our politics and political culture.

To do so, Robert B. Reich shows how liberals can:
.Shift the focus of the values debate from behavior in the bedroom to malfeasance in the boardroom
.Remind Americans that real prosperity depends on fairness
.Reclaim patriotism from those who equate it with pre-emptive war-making and the suppression of dissent
If a single book has the potential to restore our country’s good name and common sense, it’s this one.

Praise For Reason: Why Liberals Will Win the Battle for America…

“We’ve got Reich, they’ve got Coulter. We win. A brilliant and passionately argued book. Read it.” —Al Franken

“Valuable. . . . Sharp and fresh. . . .Part memoir, part explication of the contending and contentious ruling ideologies of Red and Blue America—radical conservatism and liberalism at odds—and part call to arms. . . . Not . . . an attack book, but a positive one, a call for a rebirth of a liberal ascendancy.” —Chicago Sun-Times

Robert B. Reich is University Professor at Brandeis University and Maurice B. Hexter Professor of Social and Economic Policy at Brandeis’s Heller Graduate School. He is also a visiting professor at the University of California at Berkeley. He served as secretary of labor under President Bill Clinton. His writing has appeared in The New Yorker, The Atlantic Monthly, the New York Times, the Washington Post, and The Wall Street Journal. This is his tenth book. He lives in Cambridge, Massachusetts.
Loading...
or
Not Currently Available for Direct Purchase