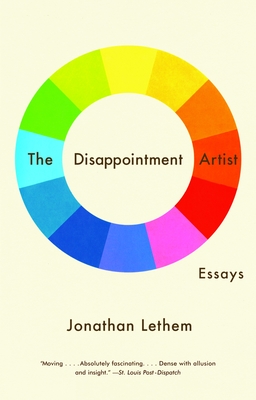 In a volume he describes as "a series of covert and not-so-covert autobiographical pieces," Jonathan Lethem explores the nature of cultural obsession—from western films and comic books, to the music of Pink Floyd and the New York City subway. Along the way, he shows how each of these "voyages out from himself" has led him to the source of his beginnings as a writer. The Disappointment Artist is a series of windows onto the collisions of art, landscape, and personal history that formed Lethem’s richly imaginative, searingly honest perspective on life. A touching, deeply perceptive portrait of a writer in the making.

"Lethem is one of our most perceptive cultural critics, conversant in both the high and low realms, his insights buffeted by his descriptive imagination."
—Los Angeles Times Book Review

"He fearlessly analyzes his influences--movies, books, artists, friends, parents--and his insights are highly personal, but also often universal, and thus these essays reach the highest goal of the memoir form."
—The Seattle Times

“These marvelous explorations take us into the hiding places of the psyche, where second thoughts are assessed, secret-sharer sins confessed, and grief and loss redressed. In a collection as warmly engaging as it is ruminative, Jonathan Lethem shows himself to be as much a master of the personal essay as he is of contemporary fiction.”
—Phillip Lopate

Jonathan Lethem is the author of six novels, including The Fortress of Solitude and Motherless Brooklyn, which won the National Book Critics Circle Award. He is also the author of two short story collections, Men and Cartoons and The Wall of the Sky, The Wall of the Eye, and the editor of The Vintage Book of Amnesia. His essays have appeared in The New Yorker, Rolling Stone, Granta, and Harper’s. He lives in Brooklyn and Maine.
Loading...
or support indie stores by buying on
(This book is on backorder)