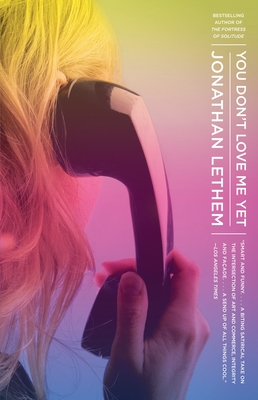 You Don't Love Me Yet (Vintage Contemporaries)

Bestselling author Jonathan Lethem delivers a hilarious novel about love, art, and what it's like to be young in Los Angeles. Lucinda Hoekke's daytime gig as a telephone operator at the Complaint Line—an art gallery's high-minded installation piece—is about as exciting as listening to dead air. Her real passion is playing bass in her forever struggling, forever unnamed band. But recently a frequent caller, the Complainer, as Lucinda dubs him, has captivated her with his philosophical musings. When Lucinda's band begins to incorporate the Complainer's catchy, existential phrases into their song lyrics, they are suddenly on the cusp of their big break. There is only one problem: the Complainer wants in.

Praise For You Don't Love Me Yet (Vintage Contemporaries)…

“Smart and funny . . . a biting satirical take on the intersection of art and commerce, integrity and façade. . . . A send up of all things cool.” —Los Angeles Times “Fit to be devoured over a weekend.” —Rolling Stone“A gentle and hip romantic comedy [that] breezes through LA's iconoclastic anonymity with a refreshing sincerity.”—The Independent “His best since Gun, With Occasional Music . . . what makes the book sing are Lethem's accounts of what happens when a crowd on the street hears a band inside a building . . . or when for a moment four musicians understand each other better than anyone of them understands him or herself.”—Greil Marcus, Interview

Jonathan Lethem is the author of six novels, including the bestsellers THE FORTRESS OF SOLITUDE and MOTHERLESS BROOKLYN, which
won the National Book Critics Circle Award. He is also the author of two short story collections, MEN AND CARTOONS and THE WALL OF THE
SKY, WALL OF THE EYE, and a collection of autobiographical essays, THE DISSAPOINTMENT ARTIST. His stories and essays have appeared in The New Yorker, Rolling Stone, Esquire, McSweeny's, Tin House, The New York Times and others. He was recently granted a MacArthur Genius Award. He lives in Brooklyn and Maine.
Loading...
or
Not Currently Available for Direct Purchase