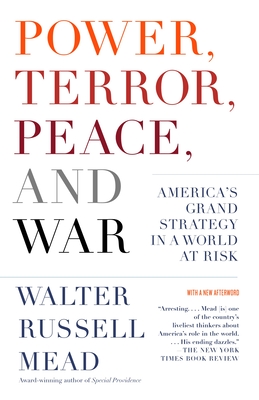 America's Grand Strategy in a World at Risk

International affairs expert and award-winning author of Special Providence Walter Russell Mead here offers a remarkably clear-eyed account of American foreign policy and the challenges it faces post—September 11.Starting with what America represents to the world community, Mead argues that throughout its history it has been guided by a coherent set of foreign policy objectives. He places the record of the Bush administration in the context of America’s historical relations with its allies and foes. And he takes a hard look at the international scene–from despair and decay in the Arab world to tumult in Africa and Asia–and lays out a brilliant framework for tailoring America’s grand strategy to our current and future threats. Balanced, persuasive, and eminently sensible, Power, Terror, Peace, and War is a work of extraordinary significance on the role of the United States in the world today.

Praise For Power, Terror, Peace, and War: America's Grand Strategy in a World at Risk…

“Arresting. . . . Mead has earned a deserved reputation as one of the country’s liveliest thinkers about America’s role in the world. . . . His ending dazzles.” –The New York Times Book Review

“Ambitious . . . a new grand strategy for the United States . . . illuminated by a bolt of rhetorical lightning.” –The Washington Post

“A serious and comprehensive survey of of the American situation.” –Los Angeles Times Book Review

“Heartening words, indeed, for those who wonder about American efforts abroad.” –The New York Sun

“Deep and provocative. . . . Indispensable to anyone trying to formulate a sensible foreign policy in light of the new threats facing America, and the new power it finds in its hands.” –The National Review

“[A] comprehensive approach to American foreign policy, one that considers not merely the terrorist challenge but the economic angle as well.” –The Weekly Standard

“In so accurately describing the world we now live in, this book helps point the way forward.” –The Globe and Mail (Toronto)

“A splendid work. . . . [Mead’s] even-handed and candid assessment of our foreign policy–past and present–is informed, perceptive and valuable.” –Henry A. Kissinger

“The author should be congratulated for his courage…. Mead writes brilliantly about the French pratfalls on the eve of the Iraq War [and] ends on a high note of American noblesse oblige to the rest of the world.” –National Interest

“An intellectually subtle, historically significant, and politically savvy discourse on America’s role in the world. The product of a truly creative mind, Mead’s elegant and most timely essay should be read by everyone concerned about this country’s destiny.” –Zbigniew Brzezinski

“Powerful. . . . An excellent explanatory work. . . . Well worth both the read and then the serious reflection.” –Decatur Daily

“With this book, Walter Mead cements his position as one of the leading thinkers on U.S. foreign policy and international affairs. In this truly important work, he cuts through noisy debate to identify the new realities and the steps we must take to forge effective policy.” –Leslie H. Gelb, President Emeritus, Council on Foreign Relations

“This powerful book should rank with the best of historical analysis [and] stay on your shelf a long time. . . . It looms large in thoughtful historical perspective and analysis.” –Santa Fe New Mexican

Walter Russell Mead, the Henry A. Kissinger Senior Fellow in U.S. Foreign Policy at the Council on Foreign Relations, is the author of Mortal Splendor and Special Providence, which won the Lionel Gelber Award for best book on international affairs in English for the year 2002. He is a contributing editor to the Los Angeles Times; has written for The New York Times, The Washington Post, The Wall Street Journal, and The New Yorker; and is a regular reviewer of books on the United States for Foreign Affairs. Mr. Mead also lectures regularly on American foreign policy. He lives in Jackson Heights, New York.
Loading...
or
Not Currently Available for Direct Purchase