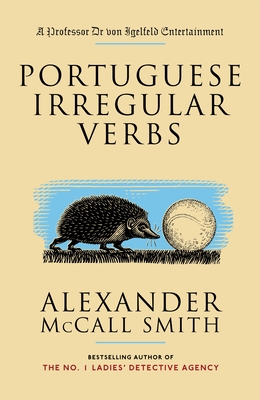 Welcome to the insane and rarified world of Professor Dr. Moritz-Maria von Igelfeld of the Institute of Romance Philology. Von Igelfeld is engaged in a never-ending quest to win the respect he feels certain he is due—a quest which has the tendency to go hilariously astray.

In Portuguese Irregular Verbs, Professor Dr von Igelfeld learns to play tennis, and forces a college chum to enter into a duel that results in a nipped nose. He also takes a field trip to Ireland where he becomes acquainted with the rich world of archaic Irishisms, and he develops an aching infatuation with a Dentist fatale. Along the way, he takes two ill-fated Italian sojourns, the first merely uncomfortable, the second definitely dangerous.

“In the halls of academe, a setting fraught with ego-driven battles for power and prestige [Alexander McCall Smith] has rendered yet another one-of-a-kind character: the bumbling but brilliant Dr. Mortiz-Maria von Igelfeld . . . . [a] deftly rendered trilogy [with] endearingly eccentric characters.” —Chicago Sun-Times

ALEXANDER McCALL SMITH is the author of the No. 1 Ladies' Detective Agency series, the Isabel Dalhousie series, the Portuguese Irregular Verbs series, the 44 Scotland Street series, and the Corduroy Mansions series. He is professor emeritus of medical law at the University of Edinburgh in Scotland and has served with many national and international organizations concerned with bioethics. He was born in what is now known as Zimbabwe and was a law professor at the University of Botswana. He lives in Scotland. Visit his website at www.alexandermccallsmith.com.
Loading...
or support indie stores by buying on