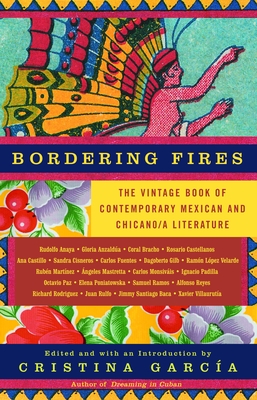 The Vintage Book of Contemporary Mexican and Chicana and Chicano Literature

As the descendants of Mexican immigrants have settled throughout the United States, a great literature has emerged, but its correspondances with the literature of Mexico have gone largely unobserved. In Bordering Fires, the first anthology to combine writing from both sides of the Mexican-U.S. border, Cristina Garc’a presents a richly diverse cross-cultural conversation. Beginning with Mexican masters such as Alfonso Reyes and Juan Rulfo, Garc’a highlights historic voices such as “the godfather of Chicano literature” Rudolfo Anaya, and Gloria Anzaldœa, who made a powerful case for language that reflects bicultural experience. From the fierce evocations of Chicano reality in Jimmy Santiago Baca’s Poem IX to the breathtaking images of identity in Coral Bracho’s poem “Fish of Fleeting Skin,” from the work of Carlos Fuentes to Sandra Cisneros, Ana Castillo to Octavio Paz, this landmark collection of fiction, essays, and poetry offers an exhilarating new vantage point on our continent–and on the best of contemporary literature.

Praise For Bordering Fires: The Vintage Book of Contemporary Mexican and Chicana and Chicano Literature…

“A marvelous introduction to some of the most luminous and illuminating voices to be found in the Chicano/a and Mexican literary traditions, offering a fascinating and resonant dialogue among them.”  –Rafael Pérez-Torres, Professor of American Literature and Chicano Studies, UCLA"In an age that reduces lo mexicano to a nefarious stereotype, this assortment of literary delights will allow shrewd readers to appreciate the richness of a millenarian civilization." –Ilan Stavans, Professor of Latin American and Latino Culture, Amherst College

Cristina García was born in Havana and grew up in New York City. Her first novel, Dreaming in Cuban, was nominated for a National Book Award and has been widely translated. Ms. García has been a Guggenheim Fellow, a Hodder Fellow at Princeton University, and the recipient of a Whiting Writers’ Award. She lives in Napa with her daughter and husband.
Loading...
or support indie stores by buying on