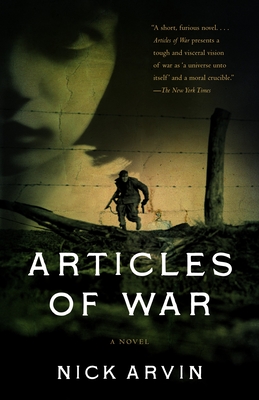 George Tilson is an eighteen-year-old farm boy from Iowa. Enlisted in the Army during World War II and arriving in Normandy just after D-day, he is nicknamed Heck for his reluctance to swear. From summers of farm labor Heck is already strong. He knows how to accept orders and how to work uncomplainingly. But in combat Heck witnesses a kind of brutality unlike anything he could have imagined. Fear consumes his every thought and Heck soon realizes a terrible thing about himself: He is a coward. Possessed of this dark knowledge, Heck is then faced with an impossible task.

Praise For Articles of War…

"A short, furious novel. . . . Articles of War presents a tough and visceral vision of war as 'a universe unto itself' and a moral crucible." –The New York Times"Articles of War stands out as a surprising achievement for our times, a story that pulses with a heart-tugging revelation." –The Bloomsbury Review"Short, spare, and beautiful, guided by a precision and a sweeping imaginative intelligence that reminds one intensely of Stephen Crane's Red Badge of Courage." –O, The Oprah Magazine"Extraordinary. . . . Articles of War explores the emotional turmoil of war, with the spin of an adolescent forced to reckon with the role he plays in an act of brutality and violence." –Rocky Mountain News

Nick Arvin studied mechanical engineering at the University of Michigan and Stanford and has worked in a variety of positions in automotive and forensic engineering. A graduate of the Iowa Writers’ Workshop and the recipient of the Michener Fellowship, he is the author of In the Electric Eden, a collection of short stories. He lives in Denver, Colorado.
Loading...
or
Not Currently Available for Direct Purchase