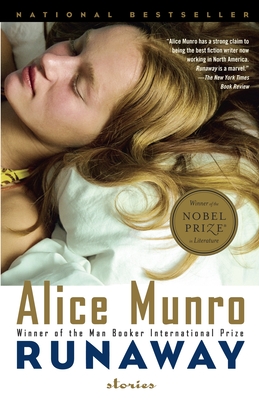 This acclaimed, bestselling collection also contains the celebrated stories that inspired the Pedro Almodóvar film Julieta. Runaway is a book of extraordinary stories about love and its infinite betrayals and surprises, from the title story about a young woman who, though she thinks she wants to, is incapable of leaving her husband, to three stories about a woman named Juliet and the emotions that complicate the luster of her intimate relationships. In Munro’s hands, the people she writes about–women of all ages and circumstances, and their friends, lovers, parents, and children–become as vivid as our own neighbors. It is her miraculous gift to make these stories as real and unforgettable as our own.

“Alice Munro has a strong claim to being the best fiction writer now working in North America. Runaway is a marvel.” –Jonathan Franzen, The New York Times Book Review

“Runaway may very well be the synthesizing work of one of literature’s keenest investigators into the human soul.” –USA Today

“She outjoices Joyce and checkmates Chekhov. . . . Each of the stories in Runaway contains enough lived life to fill a typical novel. . . . Her women are heroic. . . . They endure in the mind of the reader.” –The Boston Globe

“As with so many of Munro’s stories, you read to have your premises altered and deepened. Could anything be better? . . . A beautiful new work.” –Los Angeles Times

“The great Alice Munro proves again why short-story writers bow down to her.” –Vanity Fair

“Runaway is a big dish of Beluga caviar, sailing in on a sparkling bed of ice, with a mother-of-pearl spoon. You remember: This is why you eat, read, make love, whatever–to be left silly with admiration and delight.” –The Washington Post