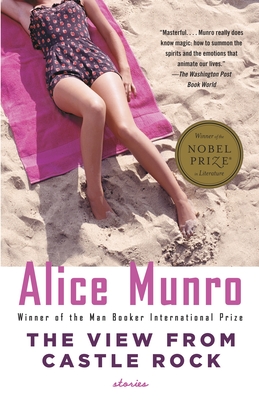 Alice Munro mines her rich family background, melding it with her own experiences and the transforming power of her brilliant imagination, to create perhaps her most powerful and personal collection yet.

A young boy, taken to Edinburgh’s Castle Rock to look across the sea to America, catches a glimpse of his father’s dream. Scottish immigrants experience love and loss on a journey that leads them to rural Ontario. Wives, mothers, fathers, and children move through uncertainty, ambivalence, and contemplation in these stories of hopes, adversity, and wonder. The View from Castle Rock reveals what is most essential in Munro’s art: her compassionate understanding of ordinary lives.


Praise For The View from Castle Rock (Vintage International)…

“Masterful. . . . Munro really does know magic: how to summon the spirits and the emotions that animate our lives.” —The Washington Post Book World

“Fascinating. . . . Munro’s powers are at their peak. . . . She continues to charge forward, shining a light on what is most fearsome and true.” —Chicago Tribune

“Exhilarating. . . . [Munro's] ability to travel into the minds and feelings of people long dead is uncanny.” —The New York Times Book Review

“Revelatory. . . . A work of aching authenticity.” —The Boston Globe