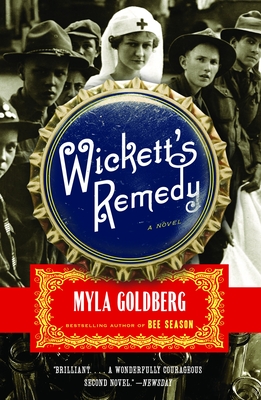 Lydia Kilkenny is eager to move beyond her South Boston childhood, and when she marries Henry Wickett, a shy Boston Brahmin who plans to become a doctor, her future seems assured. That path changes when Henry abandons his medical studies and enlists Lydia to help him invent a mail-order medicine called Wickett’s Remedy. Then the 1918 influenza epidemic sweeps through Boston, and in a world turned upside down Lydia must forge her own path through the tragedy unfolding around her. As she secures work as a nurse at a curious island medical station conducting human research into the disease, Henry’s former business partner steals the formula for Wickett’s Remedy to create for himself a new future, trying—and almost succeeding—to erase the past he is leaving behind.

Alive with narrative ingenuity, and tinged with humor as well as sorrow, this inspired recreation of a forgotten era powerfully reminds us how much individual voices matter—in history and in life.

Praise For Wickett's Remedy: A Novel…

“Remarkable. . . . A historically credible account of the period just after America entered the First World War, when ‘the Spanish Lady’ laid waste to Boston and much of the rest of the country.” –Salon

“Her second novel is of a piece with [Bee Season] in its invention and stylistic skill. . . . A warmhearted, unusual and intelligent consideration of a world about which few people know.” –San Francisco Chronicle

“An engrossing look at how one young woman grows through personal losses at a time when so many lost so much.” –The Philadelphia Inquirer

Myla Goldberg is the author of the bestselling Bee Season, which was named a New York Times Notable Book in 2000 and made into a film, and, most recently, of Time’s Magpie, a book of essays about Prague. Her short stories have appeared in Harper’s, McSweeney’s, and failbetter. She lives in Brooklyn, New York.
Loading...
or
Not Currently Available for Direct Purchase