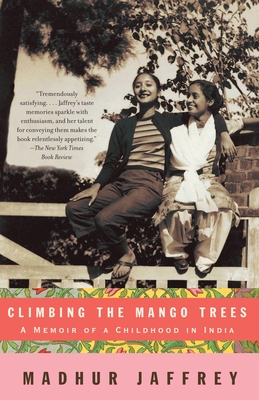 A Memoir of a Childhood in India

The enchanting autobiography of the seven-time James Beard Award-winning cookbook author and acclaimed actress who taught America how to cook Indian food.

Whether climbing the mango trees in her grandparents' orchard in Delhi or picnicking in the Himalayan foothills on meatballs stuffed with raisins and mint, tucked into freshly baked spiced pooris, Madhur Jaffrey’s life has been marked by food, and today these childhood pleasures evoke for her the tastes and textures of growing up. Following Jaffrey from India to Britain, this memoir is both an enormously appealing account of an unusual childhood and a testament to the power of food to prompt memory, vividly bringing to life a lost time and place. Also included here are recipes for more than thirty delicious dishes from Jaffrey’s childhood.


Praise For Climbing the Mango Trees: A Memoir of a Childhood in India…

“Do not attempt to read [this] mouth-wateringly evocative memoir on an empty stomach. . . . A delicious tribute to a deeply rooted, multicultural upbringing." —Newsday

“A sharp observer with a pleasing eye for sensual detail, Jaffrey weaves a richly textured story in which she effortlessly mingles quotidian drams with historic events." —People Magazine

"Her story reads like a novel and evokes images worthy of a Merchant-Ivoryproduction. You can practically taste sun warmed mangoes plucked from the tree, the barley-sugar candy that holds a hallowed place in the author's memory." —The Seattle Times

Madhur Jaffrey is the author of numerous cookbooks—seven of which have won James Beard Awards—and was named to the Who’s Who of Food and Beverage in America by the James Beard Foundation. She is the recipient of an honorary CBE from Queen Elizabeth II for her services to drama and promoting the appreciation of Indian food and culture. She is also an award-winning actress, having won the Silver Bear for Best Actress at the Berlin Film Festival, with numerous major motion pictures to her credit. She lives in New York City.