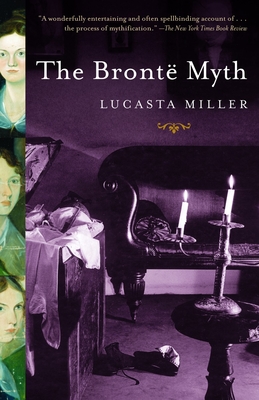 In a brilliant combination of biography, literary criticism, and history, The Bronté Myth shows how Charlotte, Emily, and Anne Bronté became cultural icons whose ever-changing reputations reflected the obsessions of various eras.

When literary London learned that Jane Eyre and Wuthering Heights had been written by young rural spinsters, the Brontés instantly became as famous as their shockingly passionate books. Soon after their deaths, their first biographer spun the sisters into a picturesque myth of family tragedies and Yorkshire moors. Ever since, these enigmatic figures have tempted generations of readers–Victorian, Freudian, feminist–to reinterpret them, casting them as everything from domestic saints to sex-starved hysterics. In her bewitching “metabiography,” Lucasta Miller follows the twists and turns of the phenomenon of Bront-mania and rescues these three fiercely original geniuses from the distortions of legend.

Lucasta Miller was educated at Oxford. She was the deputy literary editor of The Independent. Her articles and critcism have appeared in The Times, The Times Literary Supplement, The Independent, and The Sunday Telegraph.

Praise For The Bronte Myth…

“A wonderfully entertaining and often spellbinding account of . . . the process of mythification.” —The New York Times Book Review

“Absorbing. . . . Ms. Miller writes with such lucidity, wit and plain common sense that she is able to shed new light on the Bront‘s. . . . [An erudite and clearheaded book.” —The New York Times


“A juicy new biography of the Bront‘ sisters. . . . Miller ticks off [the] dizzying shifts in the Bront‘ Zeitgeist with great erudition and wit. . . . Miller’s own scholarship is formidable, her voice informal and fresh.” —The Washington Post

“A brilliant, wide-ranging studyÉmeticulously researched, written with wit and relish, and packed with irresistible detail.” —The Times (London)

“Miller unravels the Bront‘ myth with tenacity, detail, and grace–from souvenir tea towels and Haworth Parsonage mugs to Hollywood visions of wind-swept moors. In the process, she restores life to Emily and Anne, and especially to Charlotte.” —The Christian Science Monitor

“Provocative The Bront‘ Myth is a first-rate work of scholarship and criticism, and a surprisingly entertaining read. Thanks to Miller’s clearheadedness, it seems unlikely that the Bront‘s will ever again be marginalized into the spooky spinsters of the myth.” —San Jose Mercury News

“[An] ingenious book.” —The New Yorker
“Brilliant and rivetingÉ.Miller’s unputdownable and erudite book has not only left us with a clearer picture and greater understanding of the Bront‘s and the nature of biography, but tells us a lot about ourselves.” —Daily Mail (London)

“Sharply intelligent, original and wittyÉLiterary history is seldom related with such a pleasant combination of brio and erudition.” —The Sunday Times (London)

“Excellent. . . . Lucasta Miller strips away all those inaccurate accretions which have turned Charlotte, Emily and Anne into uncanny, coughing geniuses. . . . Miller’s book is so good, clever and necessary that, far from making biographical writing redundant, it shows us just how wonderful it can occasionally be. The Bront‘ Myth is essential reading.” —Sunday Telegraph (London)

“A witty deconstruction of Bront‘maniaÉdone with a deft, light touch..” —Guardian (UK)