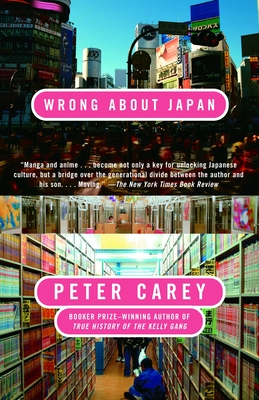 When Peter Carey offered to take his son to Japan, 12-year-old Charley stipulated no temples or museums. He wanted to see manga, anime, and cool, weird stuff. His father said yes. Out of that bargain comes this enchanting tour of the mansion of Japanese culture, as entered through its garish, brightly lit back door. Guided–and at times judged–by an ineffably strange boy named Takashi, the Careys meet manga artists and anime directors, the meticulous impersonators called “visualists,” and solitary, nerdish otaku. Throughout, the Booker Prize-winning novelist makes observations that are intriguing even when–as his hosts keep politely reminding him–they turn out to be wrong. Funny, surprising, distinguished by its wonderfully nuanced portrait of a father and son thousands of miles from home, Wrong About Japan is a delight.

"Manga and anime . . . become not only a key for unlocking Japanese culture, but a bridge over the generational divide between the author and his son. . . . Moving." –The New York Times Book Review

"The mysteries of Japan and father-son relationships prove to be rich subjects, especially for a writer at the peak of his powers. . . . An entertaining and uplifting book."
–The Sunday Times

"A pleasure to read." –The Economist

Peter Carey is the author of eight novels, including the Booker Prize–winning Oscar and Lucinda and True History of the Kelly Gang, and, most recently, My Life as a Fake. Born in Australia in 1943, Carey now lives in New York City.
Loading...
or
Not Currently Available for Direct Purchase