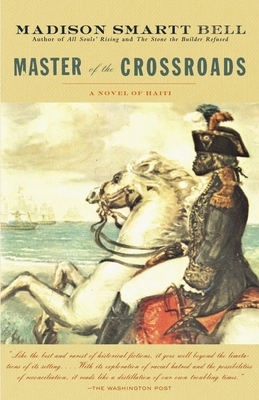 Master of the Crossroads (The Haiti Trilogy) (Paperback)

Continuing his epic trilogy of the Haitian slave uprising, Madison Smartt Bell’s Master of the Crossroads delivers a stunning portrayal of Toussaint Louverture,  former slave, military genius and liberator of Haiti, and his struggle against the great European powers to free his people in the only successful slave revolution in history. At the outset, Toussaint is a second-tier general in the Spanish army, which is supporting the rebel slaves’ fight against the French.   But w hen Toussaint is betrayed by his former allies and the commanders of the Spanish army, he reunites his army with the French, wresting vital territories and manpower from Spanish control. With his army one among several factions, Toussaint eventually rises as the ultimate victor as he wards off his enemies to take control of the French colony and establish a new constitution.

Bell’s grand, multifaceted novel shows a nation, splintered by actions and in the throes of chaos, carried to liberation and justice through the undaunted tenacity of one incredible visionary.

Madison Smartt Bell is the author of fourteen works of fiction, including The Stone That the Builder Refused; All Souls’ Rising; Save Me, Joe Louis; Dr. Sleep; Soldier's Joy; and Ten Indians. He lives in Baltimore, Maryland with his family and teaches at Goucher College.

Praise For Master of the Crossroads (The Haiti Trilogy)…

“Like the best and rarest of historical fictions, it goes well beyond the limitations of its setting. . . . With its exploration of racial hatred and the possibilities of reconciliation, it reads like a distillation of our own troubling times.” –The Washington Post

“A brilliant performance, the work of an accomplished novelist of peculiar energy and courage. . . . One puts down Master of the Crossroads with a visceral knowledge of what it felt like to wage war in Haiti at the turn of the nineteenth-century.” –The New York Times Book Review

“Fiction in the grandest, most ambitious form. . . . Often the prose swaggers muscularly, reminiscent of Cormac McCarthy in the Border Trilogy; at other times it grows florid and surreal, in the vein of Gabriel Garcia Marquez.” –The Boston Globe

“Bell has taught historians a thing or two about what it means to have an intimate relationship with the past. Throwing caution to the wind, he has taken up a little-known but hugely important subject with passion and conviction.” –Los Angeles Times

"A stunning achievement: marvelously crafted, meticulous in its historical detail, magnificent in its sweep." --The Seattle Times

“[A] rich novel. . . . Its huge tapestry of scenes on battlefields and plantations, in ranches and churches, vibrantly reanimates Bell’s cast of real and fictional characters. . . . [Toussaint] is now one of the great characters in modern literature.” --San Francisco Chronicle

"An absorbing and . . . majestic read. . . . [Bell] could not have chosen a more resonant setting than Haiti, nor found a more telling figure in whom to summon contemporary hopes and fears." --Chicago Tribune

"This meticulously researched novel has the feel of a tableau by Delacroix: a generous swirl of individual and collective fervor." --The New Yorker

"A fascinating tale. . . . Bell rides his near-perfect prose style through the terrain of the human psyche with astonishing ease." --The Philadelphia Inquirer

“Bell has learned well the lessons of [Tolstoy]. . . . [The] human drama of families, lovers and individual quests for self-knowledge envelops the reader in a brilliant blend of history and fiction.” --The Portland Oregonian

"Atmospheric, well-researched, and well-written. . . . The unfolding of Haitian history is a fascinating tale, and Bell tells it with great skill." --The Pittsburgh Post Gazette

“Provides a history lesson that tells us much about our present and, perhaps, constitutes a warning for our future.” --The Miami Herald

“Read this novel to get a feel of life and death in the midst of one of the New World’s major political and military uprisings . . . in this trilogy we find the talented Madison Smartt Bell at the crossroads of his career.” --The Dallas Morning News
or
Buy Here
Copyright © 2020 American Booksellers Association