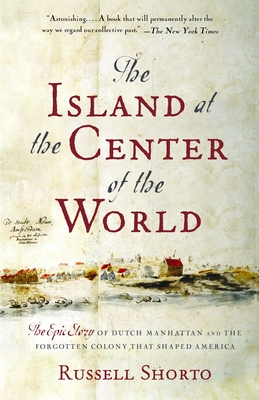 The Island at the Center of the World

In a riveting, groundbreaking narrative, Russell Shorto tells the story of New Netherland, the Dutch colony which pre-dated the Pilgrims and established ideals of tolerance and individual rights that shaped American history.

When the British wrested New Amsterdam from the Dutch in 1664, the truth about its thriving, polyglot society began to disappear into myths about an island purchased for 24 dollars and a cartoonish peg-legged governor. But the story of the Dutch colony of New Netherland was merely lost, not destroyed: 12,000 pages of its records–recently declared a national treasure–are now being translated. Russell Shorto draws on this remarkable archive in The Island at the Center of the World, which has been hailed by The New York Times as “a book that will permanently alter the way we regard our collective past.”

The Dutch colony pre-dated the “original” thirteen colonies, yet it seems strikingly familiar. Its capital was cosmopolitan and multi-ethnic, and its citizens valued free trade, individual rights, and religious freedom. Their champion was a progressive, young lawyer named Adriaen van der Donck, who emerges in these pages as a forgotten American patriot and whose political vision brought him into conflict with Peter Stuyvesant, the autocratic director of the Dutch colony. The struggle between these two strong-willed men laid the foundation for New York City and helped shape American culture. The Island at the Center of the World uncovers a lost world and offers a surprising new perspective on our own.

Praise For The Island at the Center of the World: The Epic Story of Dutch Manhattan and the Forgotten Colony That Shaped America…

“A tour de force. . . . The dramatic story of New York’s origins is splendidly told. . . . A masterpiece of storytelling and first-rate intellectual history.” --The Wall Street Journal

“Rattlingly well told–a terrific popular history about a past that beautifully illuminates the present.” —The Sunday Times [London]

“A dramatic, kaleidoscopic and, on the whole, quite wonderful book. . . . This is one of those rare books in the picked-over field of colonial history, a whole new picture, a thrown-open window. . . . [A] full-blooded resurrection of an unfamiliar American patriot.” –The New York Observer

“Deserves to be a bestseller . . .narratively irresistible, intellectually provocative, historically invaluable” –The Guardian

“A spry, informative history. . . . Shorto supplies lucid, comprehensive contexts in which to see the colony’s promise and turmoil. . . . [D]elivers the goods with clarity, color and zest.” –The Seattle Times

“As Russell Shorto demonstrates in this mesmerizing volume, the story we don’t know is even more fascinating than the one we do . . .Historians must now seriously rethink what they previously understand about New York’s origins . . .” –The New York Post

“Russell Shorto fires a powerful salvo on the war of words over America’s origins . . . he mounts a convincing case [that], in Shorto’s words, ‘Manhattan is where America began.’ Readers . . find themselves absorbed in what can only be described as a plot, revolving around two strong men with conflicting visions of the future of Dutch North America.” –America: The National Catholic Weekly

“Fascinating. . . . A richly nuanced portrait set against events on the world stage.” --Time Out New York

“Shorto brings this . . . deeply influential chapter in the city’s history to vivid, breathtaking life [with] a talent for enlivening meticulous research and painting on a broad canvas. . . . In elegant, erudite prose, he manages to capture the lives of disparate historical characters, from kings to prostitutes.” –Pittsburgh Post-Gazette

“Remarkable. . . . [C]ompulsively interesting. . . . . Shorto argues that during the brief decades of its Dutch colonial existence Manhattan had already found, once and for all, its tumultuously eclectic soul.” –New Statesman

“Shorto delineates the characters in this nonfiction drama convincingly and compellingly.” –Fort Worth Star-Telegram

“Shorto’s book makes a convincing case that the Dutch did not merely influence the relatively open, tolerant and multicultural society that became the United States; they made the first and most significant contribution.” –American History

“Shorto’s prose is deliciously rich and witty, and the story he tells–drawing heavily on sources that have only recently come to light–brings one surprise after another. His rediscovery of Adriaen van der Donck, Peter Stuyvesant’s nemesis, is fascinating.” –Edward G. Burrows, coauthor of Gotham: A History of New York City to 1898, winner of the Pulitzer Prize in History

“A landmark work . . .Shorto paints the emotions and attitudes of his characters with a sure hand, and bestows on each a believable, living presence.” –The Times (London)

“A triumph of scholarship and a rollicking narrative . . . an exciting drama about the roots of America’s freedoms.” –Walter Isaacson, author of Benjamin Franklin: An American Life