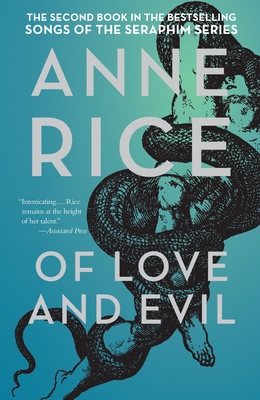 Of Love and Evil (Paperback)

The second book in this nationally bestselling series is a gripping metaphysical thriller in which angels partner up with assassins, from the author of Interview with the Vampire.

Barely recovered from his previous divine mission, former contract killer Toby O'Dare is once again summoned by the angel Malchiah to investigate the poisoning of a prominent nobleman and stop the haunting of a diabolical dybbuk. Together, they travel back to fifteenth-century Italy—the age of Michelangelo, the Holy Inquisition, and Pope Leo X—and this time Malchiah has Toby pose as a lute player sent to charm and calm this troublesome spirit. But Toby soon discovers that he is in the midst of plots and counterplots, surrounded on all sides by increasingly dangerous threats as the veil of ecclesiastical terror closes in around him.

Anne Rice is the author of thirty-five books. She lives in Palm Desert, California.

“Intoxicating. . . . Rice remains at the height of her talent.” —Associated Press

“Rice knows how to tell a story, and this one’s a lot of fun. . . . [Her] knock-your-socks-off cliffhanger ending leaves no doubt that this series has wings.” —People

“Songs of the Seraphim . . . qualifies [Rice] as one of America’s most dependably surprising storytellers. . . . An absolute bull’s eye.” —Kirkus Reviews

“Amazing. . . . The Songs of the Seraphim series . . . carries all the heart and urgency of [Rice’s] most popular books.” —Bookreporter.com