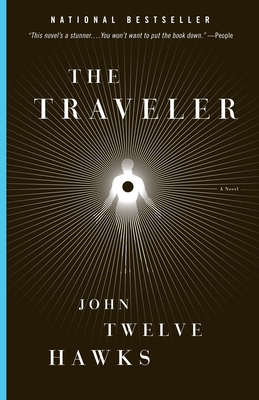 Book One of the Fourth Realm Trilogy

In London, Maya, a young woman trained to fight by her powerful father, uses the latest technology to elude detection when walking past the thousands of surveillance cameras that watch the city. In New York, a secret shadow organization uses a victim’s own GPS to hunt him down and kill him. In Los Angeles, Gabriel, a motorcycle messenger with a haunted past, takes pains to live "off the grid" — free of credit cards and government IDs. Welcome to the world of The Traveler — a world frighteningly like our own.In this compelling novel, Maya fights to save Gabriel, the only man who can stand against the forces that attempt to monitor and control society. From the back streets of Prague to the skyscrapers of Manhattan, The Traveler portrays an epic struggle between tyranny and freedom. Not since 1984 have readers witnessed a Big Brother so terrifying in its implications and in a story that so closely reflects our lives.

John Twelve Hawks lives off the grid. The Traveler is his first novel.

Praise For The Traveler: Book One of the Fourth Realm Trilogy…

“The stuff that first-rate high-tech paranoid-schizophrenic thrillers are made of.” –Time

“A fearless, brilliant action heroine (think Uma Thurman in Kill Bill); a secret history of the world; a tale of brother against brother . . . and nonstop action as the forces of good and evil battle it out. . . . Readers won’t regret taking this wild ride.” –The Times-Picayune