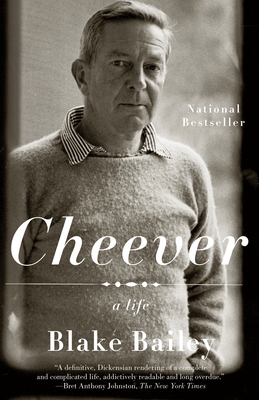 John Cheever spent much of his career impersonating a perfect suburban gentleman, the better to become one of the foremost chroniclers of postwar America. Written with unprecedented access to essential sources—including Cheever’s massive journal, only a fraction of which has ever been published—Bailey’s Cheever is a stunning example of the biographer’s art and a brilliant tribute to an essential author.

“A triumph of thorough research and unblinkered appraisal.”
—John Updike, The New Yorker

“Mesmerizing. . . . Every inch the record that Cheever deserves. . . . [Bailey] gives us remarkable access to one of the greatest writers of his time.”
—Vince Passaro, O, the Oprah Magazine

“So wise and serious, so human an account. . . . Even more eloquent and resourceful than Bailey’s celebrated biography of Richard Yates.”
—Geoffrey Wolff, The New York Times Book Review

“Sympathetic and deeply engaging. . . . This book is also a portrait of the twentieth century.”
—Jacob Molyneux, San Francisco Chronicle

“[Bailey’s] life of Cheever is an impressive, even a beautiful, achievement.”
—Algis Valiunas, Commentary

“[An] expansive, wonderfully written biography. . . . Unstinting. . . . Bracing. . . . To read Bailey on Cheever is to arrive at a much fuller appreciation of a deeply gifted chronicler of American life.”
—Matt Shaer, Christian Science Monitor

“A portrait of the man drawn judiciously but compellingly and in harrowing detail . . . . [A] fine biography.”
—Richard Lacayo, Time

“Elegant. . . An insightful, clear-eyed life of the man.”
—The Economist

“Surely definitive. . . . [Bailey] gets down his subject’s humorous staying power, even in the midst of spiritual turmoil.”
—William H. Pritchard, Boston Globe

“Exceptional. . . . Along with sensitivity and dispassionate thoroughness, it’s his smooth blending of sources into a readable narrative that sets Bailey apart as a biographer.”
—Jeffrey Burke, Bloomberg News

“Exemplary. . . . Bailey has brought [Cheever’s] life into such eloquent relief that it’s easy to imagine Cheever, if only for a moment, finally feeling like someone understood him.”
—Gregg LaGambina, A. V. Club

“Bailey’s thorough new biography completes the total revolution of our image of the man has undergone in the quarter century since his death.”
—Jonathan Dee, Harper’s

“Impressive. . . . Finely written. . . . Bailey has done a near-perfect job of making the connections between the man and his masterpieces.”
—Michael Upchurch, Seattle Times

“Quite successfully sorts out the facts, masks and contradictions of this unique American life.”
—John Barron, Chicago Sun-Times

“The appearance of Bailey’s poised, thorough biography is both timely and corrective . . . Bailey presents his subject in all his contradictory fullness . . . Cheever: A Life succeeds by balancing insight, judgment, empathy, and clarity.”
—Floyd Skloot, Philadelphia Inquirer

“Bailey has achieved what I (along with many others) thought well-nigh impossible: an outstanding, exhaustive (but never exhausting), clear-eyed and evenhanded biography of Cheever and a literary triumph in its own right.”
—George W. Hunt, America

Blake Bailey is the editor of a two-volume edition of Cheever’s work, published in 2009 by The Library of America. His last book, A Tragic Honesty, was a finalist for the National Book Critics Circle Award. He received a Guggenheim fellowship in 2005, and his articles and reviews have appeared in Slate, The New York Times, the New York Observer, and elsewhere. He lives in Virginia with his wife and daughter.
Loading...
or support indie stores by buying on