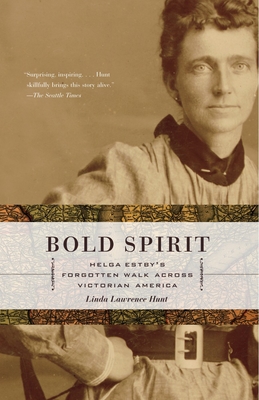 In 1896, a Norwegian immigrant and mother of eight children named Helga Estby was behind on taxes and the mortgage when she learned that a mysterious sponsor would pay $10,000 to a woman who walked across America.
Hoping to win the wager and save her family’s farm, Helga and her teenaged daughter Clara, armed with little more than a compass, red-pepper spray, a revolver, and Clara’s curling iron, set out on foot from Eastern Washington. Their route would pass through 14 states, but they were not allowed to carry more than five dollars each. As they visited Indian reservations, Western boomtowns, remote ranches and local civic leaders, they confronted snowstorms, hunger, thieves and mountain lions with equal aplomb.
Their treacherous and inspirational journey to New York challenged contemporary notions of femininity and captured the public imagination. But their trip had such devastating consequences that the Estby women's achievement was blanketed in silence until, nearly a century later, Linda Lawrence Hunt encountered their extraordinary story.

"Allows us to follow Helga Estby not only across the physical landscape of 1896 America . . . but across the country's social, political, economic, and cultural landscape as well. . . . Fascinating." --Linda Peavy and Ursula Smith, authors of Pioneer Women: The Lives of Women on the Frontier

“A heroic ‘forgotten first’ . . . a new women’s history classic has emerged.” —Foreword Magazine
“A thoughtful discussion of the social and psychological factors that often silence family stories. . . . Fortunately [Hunt] has broken the silence of Helga’s story to embolden the spirits of future generations.” --Bloomsbury Review

Linda Lawrence Hunt, an associate professor of English at Whitworth College in Spokane, Washington, now directs the Krista Foundation for Global Citizenship with her husband, Jim. An engaging speaker and freelance writer, she has published articles in regional and national publications, and has traveled throughout America and Norway. Hunt is the author of Bold Spirit, Pilgrimage through Loss, In the Long Run, and many more.
Loading...
or
Not Currently Available for Direct Purchase