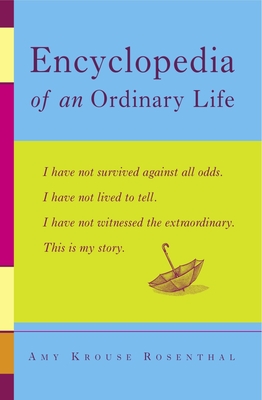 Encyclopedia of an Ordinary Life

A memoir in bite-size chunks from the author of the viral Modern Love column “You May Want to Marry My Husband.”

“[Rosenthal] shines her generous light of humanity on the seemingly humdrum moments of life and shows how delightfully precious they actually are.” —The Chicago Sun-Times

How do you conjure a life? Give the truest account of what you saw, felt, learned, loved, strived for? For Amy Krouse Rosenthal, the surprising answer came in the form of an encyclopedia. In Encyclopedia of an Ordinary Life  she has ingeniously adapted this centuries-old format for conveying knowledge into a poignant, wise, often funny, fully realized memoir.

Using mostly short entries organized from A to Z, many of which are cross-referenced, Rosenthal captures in wonderful and episodic detail the moments, observations, and emotions that comprise a contemporary life. Start anywhere—preferably at the beginning—and see how one young woman’s alphabetized existence can open up and define the world in new and unexpected ways.

An ordinary life, perhaps, but an extraordinary book.

Praise For Encyclopedia of an Ordinary Life: A Memoir…

“Entries are consistently amusing, revelatory, poetic, or strike that “That’s exactly how I see/experience it!” synapse in the brain…A+.” —The Plain Dealer (Cleveland)

“[Rosenthal] shines her generous light of humanity on the seemingly humdrum moments of life and shows how delightfully precious they actually are…a marvelous memoir.” —The Chicago Sun-Times

“Encyclopedia has miles of pillow book charm…Rosenthal’s humor is generous and endearingly scattershot.” —The Village Voice

“Reading it, you get the feeling that not only would you like Amy to be your best friend because she’s so thoughtful and endearing but because the most ordinary of moments do not escape her own unique sense of profundity.” —The Detroit News

“The perfect postmodern memoir, collecting the bits and pieces of a so-called average life and filing them into a clever narrative that reveals “ordinary” is anything but.” —Sun-Sentinel (South Florida)

Amy Krouse Rosenthal was the award-winning author of more than thirty children’s books. She also authored two adult books: Encyclopedia of an Ordinary Life and Textbook Amy Krouse Rosenthal. Her final essay, “You May Want to Marry My Husband,” was published in the New York Times Modern Love column and quickly went viral. Amy Krouse Rosenthal died ten days after the publication in March 2017.
Loading...
or support indie stores by buying on
(This book is on backorder)