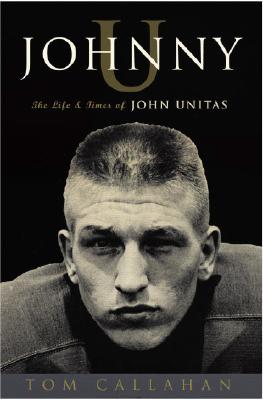 The Life and Times of John Unitas

In a time “when men played football for something less than a living and something more than money,” John Unitas was the ultimate quarterback. Rejected by Notre Dame, discarded by the Pittsburgh Steelers, he started on a Pennsylvania sandlot making six dollars a game and ended as the most commanding presence in the National Football League, calling the critical plays and completing the crucial passes at the moment his sport came of age.

Johnny U is the first authoritative biography of Unitas, based on hundreds of hours of interviews with teammates and opponents, coaches, family and friends. The depth of Tom Callahan’s research allows him to present something more than a biography, something approaching an oral history of a bygone sporting era. It was a time when players were paid a pittance and superstars painted houses and tiled floors in the off-season—when ex-soldiers and marines like Gino Marchetti, Art Donovan, and “Big Daddy” Lipscomb fell in behind a special field general in Baltimore. Few took more punishment than Unitas. His refusal to leave the field, even when savagely bloodied by opposing linemen, won his teammates’ respect. His insistence on taking the blame for others’ mistakes inspired their love. His encyclopedic football mind, in which he’d filed every play the Colts had ever run, was a wonder.

In the seminal championship game of 1958, when Unitas led the Colts over the Giants in the NFL’s first sudden-death overtime, Sundays changed. John didn’t. As one teammate said, “It was one of the best things about him.”

Praise For Johnny U: The Life and Times of John Unitas…

“If there were a Mount Rushmore of pro football, the craggy face of Unitas would be one of the four figures on it. Tom Callahan is the perfect writer to tell the real story of Johnny U, and he does it with deep reporting and clear writing, cracking a myth etched in stone and bringing back to vivid life the real man.” —David Maraniss, author of When Pride Still Mattered: A Life of Vince Lombardi

“I’ll be honest. I’ve never read a football book written by somebody else that made me wish my own name was on it—until now. Johnny U is a classic.” —Dan Jenkins, author of Semi-Tough

“Magnificent . . . Tom Callahan takes us through legendary times, bringing to life the history of professional football and the great players who were the essence of gridiron competition.” —Bill Walsh, member, NFL Hall of Fame; two-time NFL Coach of the Year

“A wonderfully human portrait of a legendary sportsman . . . takes us back to a team, a town, and a time that should never be forgotten.” —Jeffrey Marx, Pulitzer Prize–winning author of Season of Life

“As elegant, tough, tender, and unforgettable as Johnny U himself . . . This is Hall of Fame stuff.” —Dave Kindred, author of Sound and Fury

“As a young dyed-in-the-wool Baltimore Colts fan, I watched Johnny U ascend from a mere mortal to a football god. Tom Callahan gives us a full-textured account, as exciting as sudden-death overtime.” —Barry Levinson, writer and director of Diner

“Destined to be acknowledged a classic . . . By page forty you’re saying to yourself, ‘I don’t want this to end.’” —Dick Stockton, longtime broadcaster, Fox Sports