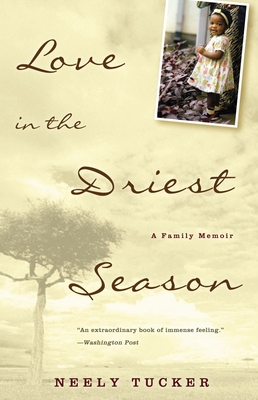 Love in the Driest Season (Paperback)

In 1997 foreign correspondent Neely Tucker and his wife, Vita, arrived in Zimbabwe. After witnessing the devastating consequences of AIDS and economic disaster on the country’s children, the couple started volunteering at an orphanage where a critically ill infant, abandoned in a field on the day she was born, was trusted to their care. Within weeks, Chipo, the baby girl whose name means “gift,” would come to mean everything to them. Their decision to adopt her, however, would challenge an unspoken social norm: that foreigners should never adopt Zimbabwean children. Against a background of war, terrorism, disease, and unbearable uncertainty about the future, Chipo’s true story emerges as an inspiring testament to the miracles that love—and dogged determination—can sometimes achieve.

Neely Tucker is a staff writer for the Washington Post. He lives in Washington, D.C., with his family.

Praise For Love in the Driest Season: A Family Memoir…

“A triumph of heart and will.” —O, the Oprah Magazine

“An extraordinary book of immense feeling and significant social relevance. Love in the Driest Season challenges anyone—even those numbed by the world’s abundant cruelty—not to care.” —Washington Post

“Unceasingly compelling and filled with soaring highs and lows, Love in the Driest Season is a remarkable memoir of love and family.” —Pages

“A gorgeous mix of family memoir and reportage that traverses the big issues of politics, racism, and war.” —Publishers Weekly (starred review)

“Tucker’s hard-hitting memoir . . . is an almost unbelievable tale of bureaucracy, lunacy, and love. The suspense is stomach-wrenching and infuriating.” —Orlando Sentinel
or
Not Currently Available for Direct Purchase
Copyright © 2020 American Booksellers Association