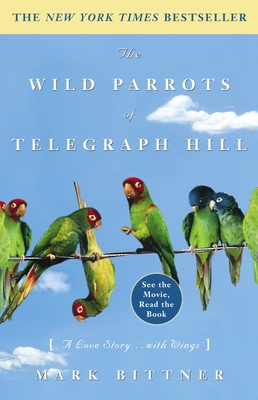 The Wild Parrots of Telegraph Hill

Like a lot of young people in the 1970s, Mark Bittner took the path of the “dharma bum.” When the counterculture faded, Mark held on, seeking shelter in the nooks and crannies of San Francisco’s fabled bohemian neighborhood, North Beach. While living on the eastern slope of Telegraph Hill, he made a magical discovery: a flock of wild parrots. In this unforgettable story, Bittner recounts how he became fascinated by the birds and patiently developed friendships with them that would last more than six years. When a documentary filmmaker comes along to capture the phenomenon on film, the story takes a surprising turn, and Bittner’s life truly takes flight.

“[An] inspirational saga of one man finding his life’s meaning in the most serendipitous way.” —San Jose Mercury News

MARK BITTNER is the subject of a documentary film, also titled The Wild Parrots of Telegraph Hill, directed by Judy Irving. He still lives in San Francisco on Telegraph Hill.
Loading...
or support indie stores by buying on