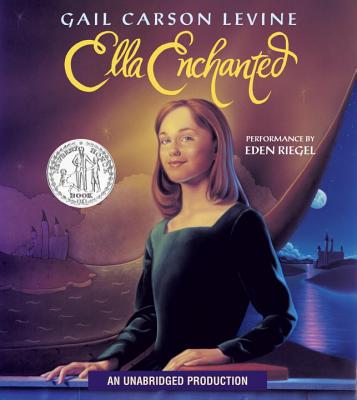 That fool of a fairy Lucinda did not intend to lay a curse on me. She meant to bestow a gift. When I cried inconsolably through my first hour of life, my tears were her inspiration. Shaking her head sympathetically at Mother, the fairy touched my nose. "My gift is obedience. Ella will always be obedient. Now stop crying, child." I stopped.

So begins this richly entertaining story of Ella of Frell, who wants nothing more than to be free of Lucinda's gift and feel that she belongs to herself. For how can she truly belong to herself if she knows that at any time, anyone can order her to hop on one foot, cut off her hand, or betray her kingdom--and she'll have to obey?

Against a bold tapestry of princes, ogres, giants, wicked stepsisters, and fairy godmothers, Ella's spirited account of her quest to break the curse is a funny, poignant, and enchanting tale about an unforgettable heroine who is determined to be herself.

Eden Riegel provided the voice of Young Miriam in the animated feature film Prince of Egypt, and has appeared in the film Into the Woods. Her television credits include recurring roles on New York Undercover, As the World Turns and Guiding Light. On Broadway, she was one of the original cast members of Les Miserables and performed in The Will Rogers Follies.

When Gail Carson Levine was growing up, her favorite book was Peter Pan by James M. Barrie, and she thought Wendy was an idiot for wanting to leave Neverland. Gail has been reading fairy tales all her life, but she didn't start writing them until she was grown up. Her eleven books for children include Newbery Honor-winning Ella Enchanted, available on audio from Listening Library, and the picture book Betsy Who Cried Wolf. She lives with her husband, David, and their Airedale terrier, Baxter, in a two-hundred-year-old farmhouse in New York's Hudson Valley.
Loading...
or
Not Currently Available for Direct Purchase