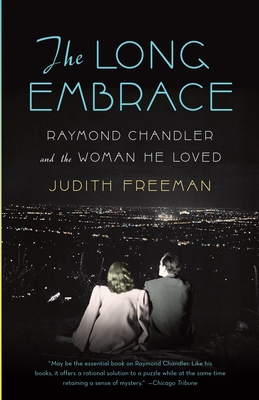 Raymond Chandler and the Woman He Loved

Raymond Chandler was among the most original and enduring crime novelists of the twentieth century. Yet much of his pre-writing life, including his unconventional marriage, has remained shrouded in mystery. In this compelling, wholly original book, Judith Freeman sets out to solve the puzzle of who Chandler was and how he became the writer who would create in Philip Marlowe an icon of American culture. Visiting Chandler's many homes and apartments, Freeman uncovers vestiges of the Los Angeles that was Chandler's terrain and inspiration for his imagination. She also uncovers the life of Cissy Pascal, the older, twice-divorced woman Chandler married in 1924. A revelation of a marriage that was a wellspring of need, illusion, and creativity, The Long Embrace provides us with a more complete picture of Raymond Chandler's life and art than any we have had before.

Praise For The Long Embrace: Raymond Chandler and the Woman He Loved…

“Part biography, part detective story, part love story, and part séance, The Long Embrace takes us on Judith Freeman’s journey to discover the private Raymond Chandler through the lens of his marriage to a woman eighteen years older than himself, a woman he adored and yet whose every scrap of correspondence he destroyed following her death. Lively, quirky, revealing of both author and subject, this is a welcome addition to any Chandler addict’s library.”—Janet Fitch, author of White Oleander“This elegant, stirring book plumbs a great mystery, one hidden, from even Chandler’s many devoted readers, in plain sight. Freeman’s book is a meditation on marriage, a persuasive biographical and literary study, and, best of all, one of those rare books, like Nicholson Baker’s U and I or Geoff Dyer’s Out of Sheer Rage, where one writer’s study of another takes the form of a confessional fugue on the writing act itself.” —Jonathan Lethem, author of The Fortress of Solitude“A compelling picture of present-day Los Angeles and a compelling dual portrait of Chandler and his wife . . .  Ms. Freeman knows the territory as well as Marlowe himself . . . she feels the language and captures the mood. Like Cissy, when she crooks her finger, it’s impossible not to follow.”—The New York Times“A beautiful and original book. . . Freeman writes about L.A. with a tender precision and yearning that borders on the religious. . . In "The Long Embrace," magic has occurred. Freeman's identification with her subject is so complete we feel we're there with Chandler too.”—The Los Angeles Times"The Long Embrace" may be the essential book on Raymond Chandler. Like his books, it offers a rational solution to a puzzle while at the same time retaining a sense of mystery.”—The Chicago Tribune“An invaluable prism to understand Raymond Chandler, his wife and most of all Los Angeles and its environs, of which he became the literary champion . . . Ms. Freeman's intuitive understanding of the writer and his terrain make her the perfect person to ask the right questions . . . Ms. Freeman not only establishes the centrality of Cissy to Chandler's life and art, she actually succeeds in making the reader feel their passion.”—The Washington Times“Compelling biography . . . a novelist's nonfiction triumph.”—The Pittsburgh Post-GazetteIn this unusual, beautifully modulated study, Judith Freeman gives us a probing look at Chandler and his inspirations . . . [Freeman] is a wonderfully astute critic of Chandler's writing, and poignant explainer of the torments that fed his vision . . . What makes this an exceptional book is the way Freeman merges her own personal obsession with Chandler with a haunting meditation on Los Angeles. Few writers have revealed the essence of this chronically misunderstood city so well.—Newsday“A fascinating book”—The Tuscon Citizen “An acute and empathic study . . . Freeman does some fine literary detective work.”—The Guardian

Judith Freeman is the author of four novels—The Chinchilla Farm, Set for Life, A Desert of Pure Feeling, and Red Water—and of Family Attractions, a collection of short stories. She lives in California.
Loading...
or
Not Currently Available for Direct Purchase