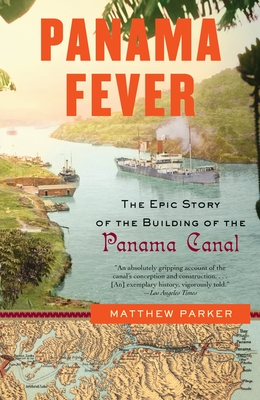 The Epic Story of the Building of the Panama Canal

The Panama Canal was the costliest undertaking in history; its completion in 1914 marked the beginning of the “American Century.” Panama Fever draws on contemporary accounts, bringing the experience of those who built the canal vividly to life. Politicians engaged in high-stakes diplomacy in order to influence its construction. Meanwhile, engineers and workers from around the world rushed to take advantage of high wages and the chance to be a part of history. Filled with remarkable characters, Panama Fever is an epic history that shows how a small, fiercely contested strip of land made the world a smaller place and launched the era of American global dominance.


Praise For Panama Fever: The Epic Story of the Building of the Panama Canal…

“A marvelously comprehensive work about an epic engineering triumph.”
—The Philadelphia Inquirer

“A detailed study of the myriad personalities and design plans associated with the work. . . . . [Parker's] limpid prose is best suited to accounts of the dangers the laborers faced.”
—The New Yorker

“Parker has written the Panama story for a new generation. . . . It is [the workers'] heartfelt views on the conditions in which they lived and worked that really bring this book to life.”
—The Economist

“Few great feats of engineering have been steeped in as much passion and tragedy as the Panama Canal, and no one tells the story better than Matthew Parker. Through meticulous research and vivid, vigorous prose, Parker has captured the frenzy surrounding the canal and the heartbreaking toll that it took on the thousands of men who set off like soldiers to Panama’s ‘Fever Coast,’ never to return.”
—Candice Millard, author of The River of Doubt: Theodore Roosevelt’s Darkest Journey

“[An] engrossing narrative of what Theodore Roosevelt called ‘one of the great works of the world.’”
—Publishers Weekly (starred review)

Matthew Parker was born in El Salvador in 1970 to an expatriate family, and grew up in Britain, Norway, and Barbados. He earned a degree in English at Oxford University before moving to London to work in publishing. The author of The Battle of Britain, Monte Casino, The Sugar Barons, and Goldeneye, Matthew is a member of the Authors Cricket Club and contributes regularly to the Oxford Companion. He now works as a writer and editor specializing in modern history, and lives in London with his wife and three children.