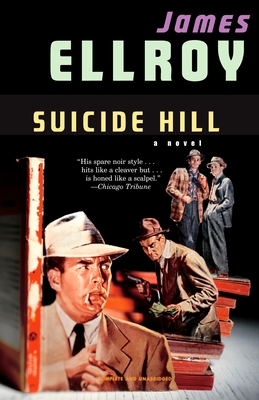 Detective Sergeant Lloyd Hopkins is the most brilliant homicide detective in the Los Angeles Police Department and one of its most troubled. In his obsessive mission to protect the innocent, there is no line he won’t cross. Estranged from his wife and daughters and on the verge of being drummed out of the department for his transgressions, Hopkins is assigned to investigate a series of bloody bank robberies. As the violence escalates and the case becomes ever more vicious, Hopkins will be forced to cross the line once again to stop a maniac on a murder binge.

"His spare noir style . . . hits like a cleaver but . . . is honed like a scalpel." –Chicago Tribune"Nobody in this generation matches the breadth and depth of James Ellroy's way with noir." –The Detroit News“One of the great American writers of our time.” –Los Angeles Times"Our best living mystery writer. . . . Literate, suspenseful, honest. . . . His pages crackle with maniac energy. . . . Ellroy captures the vocabulary, the rituals, the smells and rhythms and colors of real people living on the edge. . . . Nobody since Chandler has evoked so perfectly the seamy side of LA. " –Austin Chronicle

James Ellroy was born in Los Angeles in 1948. His L.A. Quartet novels--The Black Dahlia, The Big Nowhere, L.A. Confidential, and White Jazz--were international bestsellers. American Tabloid was Time's Novel of the Year for 1995; his memoir My Dark Places was a Time Best Book of the Year and a New York Times Notable Book for 1996; The Cold Six Thousand was a New York Times Notable Book and a Los Angeles Times Best Book of the Year for 2001. He lives on the California coast.
Loading...
or
Not Currently Available for Direct Purchase