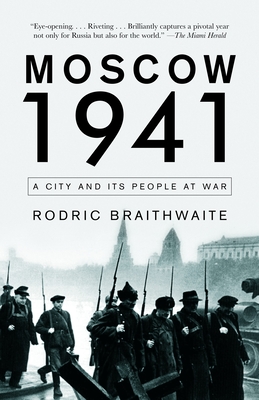 A City and Its People at War

In 1941 close to one million Russian soldiers died defending Moscow from German invasion–more causalities than that of the United States and Britain during all of World War II. Many of these soldiers were in fact not soldiers at all, but instead ordinary people who took up arms to defend their city. Students dropped their books for guns; released prisoners exchanged their freedom for battle; and women fought alongside men on the bloody, mud-covered frozen road to Moscow. By the time the United States entered the war the Germans were already retreating and a decisive victory had been won for the Allies. With extensive research into the lives of soldiers, politicians, writers, artists, workers, and children, Rodric Braithwaite creates a richly detailed narrative that captures this crucial moment. Moscow 1941 is a dramatic, unforgettable portrait of an often overlooked battle that changed the world.

“Eye-opening. . . . Riveting. . . . Brilliantly captures a pivotal year not only for Russia but also for the world.” —The Miami Herald“A symphonic evocation of a great city at war.”—The New Yorker“A gripping portrait. . . . Braithwaite knows his subject and the personal stories he weaves together allow for a particularly rich recreation of a pivotal moment in history.” —The Christian Science Monitor

Rodric Braithwaite was British ambassador to Moscow during the critical years of perestroika and the collapse of the Soviet Union, the failed coup of August 1991, and the rise of Boris Yeltsin. With his long experience of Russia, on good personal terms with Mikhail Gorbachev, he was in a privileged position close to the center of Russia's changing relationship with the West. Rodric Braithwaite was based in Moscow from September 1988 to May 1992. He retains business and educational interests in Russia.
Loading...
or
Not Currently Available for Direct Purchase