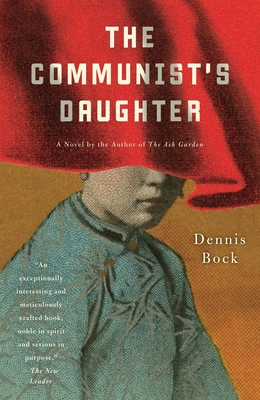 The Communist's Daughter is a sweeping novel of love and betrayal spanning the trenches of the Great War to the horrors of Spain and China. Norman Bethune was a visionary whose dedication touched millions. Rebelling in childhood against his father's religion, he finds a calling himself, saving lives on the battlefield. In Republican Spain he fulfills his idealism, yet before long politics destroy his romance and drive him to seek refuge in China. Here, in service to a man eventually known as Mao Zedong, Bethune begins this account of his life and his cherished beliefs for the only person who still makes a future seem possible: the daughter he has never seen.

Dennis Bock was awarded the Canada-Japan Literary Award in 2002 for The Ash Garden. He lives in Ontario with his wife and their two sons.

“Tender, honest and dramatic. . . . Bock paints a broad, yet vivid account of a man's life on the battlefield, and illuminates the personal and political ideals amid the confusion of war." —The Providence Journal"Bock's spare narrative draws a well-rounded character study of a dedicated, flawed individual ultimately ravaged by the tedium and monstrosity of war surrounding him." —Entertainment Weekly"Reminiscent of Marilynne Robinson's Gilead in gravitas and lyricism, Bock's novel about a man who means to do good in the world, steadfastly faces death, and reveres the planet's beauty is a study in sorrow, courage, and mystery." —Booklist"Bock's descriptions of war's detritus--the wounded, the dying, the starving, the haunted--recall Goya's darkest visions. . . . Deeply affecting." —The Boston Globe
or
Not Currently Available for Direct Purchase
Copyright © 2020 American Booksellers Association