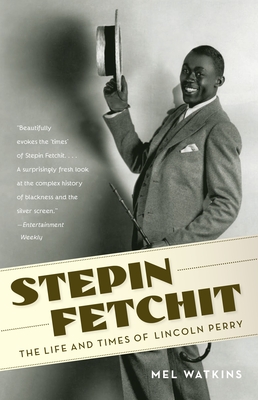 The Life & Times of Lincoln Perry

In the late 1920s and '30s Lincoln Perry, aka Stepin Fetchit, was both renowned and reviled for his surrealistic portrayals of the era’s most popular comic stereotype–the lazy, shiftless Negro. Perry was hailed by critic Robert Benchley as “the best actor that the talking movies have produced,” and Mel Watkins’s meticulously researched and sensitive biography reveals the paradoxes of this pioneering actor’s life, from Perry’s tremendous popularity to his money troubles and rowdy offscreen antics. As later generations come to recognize Perry’s prodigious talent and achievements, in Stepin Fetchit, Mel Watkins brilliantly and definitively illuminates the life and times of a legendary figure in American entertainment.

Mel Watkins, a former editor and writer for The New York Times Book Review, is the author of Dancing with Strangers, a Literary Guild Selection, and of the highly acclaimed On the Real Side: A History of African American Comedy. He lives in New York City.

Praise For Stepin Fetchit: The Life & Times of Lincoln Perry…