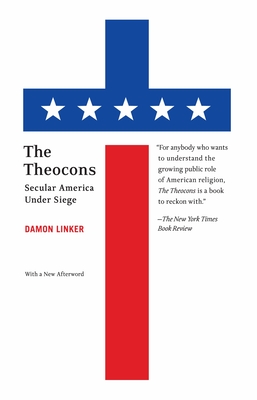 An essential history of the influential men who have spearheaded the movement to erode the wall separating church and state.Beginning as far-left radicals during the 1960s, the theocons in Damon Linker’s book (including Richard John Neuhaus, Michael Novak, and George Weigel) gradually transitioned to conservatism when they grew frustrated with the failures of the decade’s revolutionary goals. Linker shows how, starting during the Reagan administration, they worked to forge a Christian alliance between Evangelical Protestants and Conservative Catholics. By injecting the language of faith into political life, this movement appealed to a wide swath of voters and ultimately played a central role in the election of George W. Bush. The Theocons is an absorbing and revelatory look at an ideological crusade that every American needs to know about.

Praise For The Theocons: Secular America Under Siege…

“For anybody who wants to understand the growing public role of American religion, [The Theocons] is a book to reckon with.”—The New York Times Book Review“Literate and reasonable. . . . One of the most enlightening critiques of the Religious Right to date.” —Booklist“The Theocons constitutes a major step toward reclaiming the liberal heritage that has made America great.”—Alan Wolfe, author of The Transformation of American Religion“Invaluable. . . . Alarming. . . . Devastating as a critique of the theocratic ambitions of those who now control the Republican Party.”—Andrew Sullivan

Damon Linker is a Senior Writing Fellow in the Center for Critical Writing at the University of Pennsylvania. His essays and reviews have appeared in The New Republic, The New York Times, The Wall Street Journal, Commentary, National Review, The Weekly Standard, Policy Review, The Public Interest, The Review of Politics, The Review of Metaphysics, and the American Behavioral Scientist. From May 2001 to February 2005, he worked under Richard John Neuhaus at First Things—first as associate editor of the journal, then as its editor. Prior to joining the magazine, he taught political philosophy at Brigham Young University and served as a speechwriter for New York’s Mayor Rudolph W. Giuliani. Linker studied history, philosophy, and writing at Ithaca College, graduating with a BA in 1991. He went on to earn an MA in European history from New York University and a Ph.D. in political science from Michigan State University. Born in New York City, Linker currently lives in suburban Philadelphia with his wife and two children.
Loading...
or
Not Currently Available for Direct Purchase