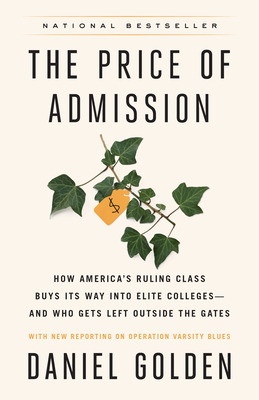 The Price of Admission (Updated Edition)

NATIONAL BESTSELLER • “A fire-breathing, righteous attack on the culture of superprivilege.”—Michael Wolff, author of the #1 New York Times bestseller Fire and Fury, in the New York Times Book Review

In this explosive and prescient book, based on three years of investigative report­ing, Pulitzer Prize winner Daniel Golden shatters the myth of an American meri­tocracy. Naming names, along with grades and test scores, Golden lays bare a corrupt system in which middle-class and working-class whites and Asian Ameri­cans are routinely passed over in favor of wealthy white students with lesser credentials—children of alumni, big donors, and celebrities. He reveals how a family donation got Jared Kushner into Harvard, and how colleges comply with Title IX by giving scholarships to rich women in “patrician sports” like horseback riding and crew.

With a riveting new chapter on Operation Varsity Blues, based on original re­porting, The Price of Admission is a must-read—not only for parents and students with a personal stake in college admissions but also for those disturbed by the growing divide between ordinary and privileged Americans.

Praise for The Price of Admission

“A disturbing exposé of the influence that wealth and power still exert on admission to the nation’s most prestigious universities.”—The Washington Post

“Deserves to become a classic.”—The Economist

Praise For The Price of Admission (Updated Edition): How America's Ruling Class Buys Its Way into Elite Colleges--and Who Gets Left Outside the Gates…

“A delicious account of gross inequities in high places. . . . [Golden] is the Ida Tarbell of college admissions. . . . A fire-breathing, righteous attack on the culture of super-priviledge.”—Michael Wolff, New York Times Book Review

“Deserves to become a classic. . . . Why do Mr Golden's findings matter so much? The most important reason is that America is witnessing a potentially explosive combination of trends. Social inequality is rising at a time when the escalators of social mobility are slowing.”—The Economist

“I didn’t want to believe that rich families and celebrities buy places for their children in America’s best colleges. But Daniel Golden’s evidence is overwhelming. This book should be read by everyone who cares about preserving higher education as a route for developing talent, not rewarding privilege.”—Diane Ravitch, research professor of education, New York University, and author of Left Back

“If you did not attend or do not teach at a prestigious university, do not play polo well enough to pass it on, and do not have a cool million lying around to buy a place in the freshman class, your child might not make it into the school he or she deserves to attend. Daniel Golden explains why in this passionately written and bitingly acute book.”—Alan Wolfe, professor of political science, Boston College, and author of One Nation, After All

“Daniel Golden makes a trenchant and convincing case that admission to America’s elite universities has too often turned into a system for reinforcing wealth and privilege, rather than opening new opportunities. He names names—and test scores, and family donation levels. In the wake of this book, the university establishment has some explaining to do.”—James Fallows, national correspondent, The Atlantic Monthly, and author of Blind into Baghdad

“Anyone who believes that affirmative action for minority students is the big threat to college admissions by merit should confront Golden’s evidence that most elite colleges show much larger preferences for the privileged and the connected. I hope the book helps move colleges toward more equitable practices.”—Gary Orfield, professor of education and social policy, Harvard Graduate School of Education

“Daniel Golden pulls back the curtain on the world of selective college admissions, where the already privileged are the truly preferred. With vigorous prose and artful anecdotes, Golden tells a chilling story of double standards and double crossings. He reminds us that when elite college admissions go to the highest bidders, we all pay the price.”—Lani Guinier, Bennett Boskey Professor, Harvard Law School, and author of Lift Every Voice

“If you or your child is applying to a selective college this year, here's a reading assignment: Pick up a copy of The Price of Admission , a new book by Wall Street Journal reporter Daniel Golden. It'll either give you a useful view into how the elite admissions game works or just leave you disgusted about the whole enterprise. Actually, probably both. Mr. Golden's subject is the root unfairness in the way elite colleges choose who wins the coveted spots in their freshman classes. . . . Mr. Golden, himself a Harvard alum, details the ways colleges chase after the children of the rich and powerful, like paparazzi pursuing Paris Hilton.”—Joshua Benton, Dallas Morning News

“The Price of Admission is perfect for those curious about what goes on in college admissions offices because it shatters assumptions about acceptance to elite colleges. . . . The Price of Admission forces the reader to wonder how affirmative action can be deemed controversial when favoritism of the white and wealthy is overly prominent in elite colleges. . . . [F]or those interested in the injustices in higher education, this book is a must-read."—Kansas City Star

“If you're ‘shocked’ by this, you haven't been paying close attention.”—Boston Globe

“Golden has fun making trouble in the best journalistic sense. . . . The Price of Admission is a powerful reminder that the public will increasingly require selective colleges to defend their preferences; that not all are prepared to make their complex case well; and that some of their practices, finally, seem indefensible today.”—Harvard Magazine

Daniel Golden is a senior editor at ProPublica. He was previously a managing editor at Bloomberg News, the deputy Boston bureau chief of The Wall Street Journal, and a reporter for The Boston Globe. The recipient of many journalistic honors, including the Pulitzer Prize and three George Polk Awards, he holds a Bachelor of Arts from Harvard College.