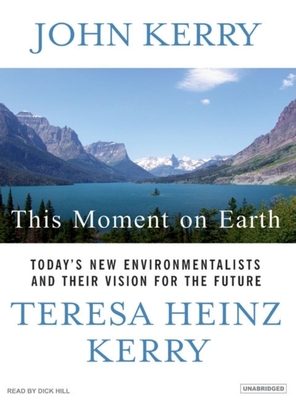 This Moment on Earth (Compact Disc)

Today's New Environmentalists and Their Vision for the Future

The environment, and the movement that grew up to protect it, is under attack-concerted and purposeful. Yet the need for solutions to pressing environmental problems grows more urgent each day. Teresa Heinz Kerry and Senator John Kerry traveled across the country in a national campaign to see firsthand how these issues unite people across party and ideological lines. From the San Juan Basin to the Gulf of Mexico to the South Bronx, from mothers on Cape Cod to Colorado ranchers, they found a vibrant coalition of people and communities deploying ingenuity, technology, and sheer will power to save the world they know and love. Now, in this passionate and personal book, Senator John Kerry and Teresa Heinz Kerry shine the spotlight on an inspiring cross-section of these new environmental pioneers. This Moment on Earth combines intensive research with keenly observed personal experiences to present a portrait of Americans devoted to the natural diversity and spectacular uniqueness of our country.

John Kerry has served four terms as the senator from Massachusetts (D). Teresa Heinz, the wife of Senator John Kerry, is the chairman of the Howard Heinz Endowment and the Heinz Family Philanthropies.

Reader of over four hundred audiobooks, Dick Hill has won three coveted Audie Awards and been nominated numerous times. He is also the recipient of several "AudioFile" Earphones Awards. "AudioFile" includes Dick on their prestigious list of Golden Voices.
or
Not Currently Available for Direct Purchase
Copyright © 2020 American Booksellers Association