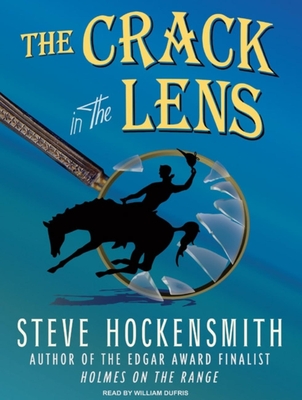 The Crack in the Lens (Compact Disc)

In 1893, Otto "Big Red" Amlingmeyer and his brother, Gustav "Old Red," find themselves in a situation that they never expected: they have a bit of money and time to do something other than scramble. It's enough to confound even that most unconfoundable of men, their mutual inspiration, Sherlock Holmes. So Old Red decides that it's time for the two of them to head off to the Texas hill country, to San Marcos, and deal with the greatest tragedy of Old Red's life. Five years ago, when Old Red was a cowpoke in San Marcos, he had a sweetheart-a fallen woman at the local house of ill repute. They had made plans, but before they made their big move, his fiancee was murdered and the case was swept under the rug by the local authorities. Now Old Red is determined to find out what really happened and to finally find a measure of justice for his beloved. But Big Red and Old Red find themselves facing a wall of silence and in some of the worst situations of their lives: ensnared in a riot at the local cathouse, on the wrong end of a lynching party, and, perhaps worst of all, having to do the one thing you never want to do in the state of Texas: steal horses.

Steve Hockensmith writes a monthly column for "Alfred Hitchcock's Mystery Magazine," and he is the author of "Holmes on the Range," an Edgar Award finalist and the beginning of his highly successful Holmes on the Range mystery series.

Praise For The Crack in the Lens…

"The personal stake Old Red has in catching the murderer adds an emotional dimension to the puzzle, which Edgar-finalist Hockensmith nicely leavens with witty prose and cliffhanging chapter endings." ---Publishers Weekly Starred Review