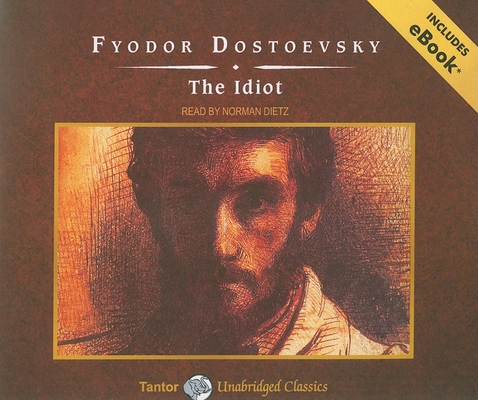 Just two years after completing Crime and Punishment, which explored the mind of a murderer, Fyodor Dostoevsky produced another masterpiece: The Idiot. This time the author portrays a truly beautiful soul and one of Dostoevsky's greatest characters-Prince Muishkin, a saintly, Christ-like, yet deeply human figure. The story begins when Muishkin arrives on Russian soil after a stay in a Swiss sanatorium. Scorned by St. Petersburg society as an idiot for his generosity and innocence, the prince finds himself at the center of a struggle between a rich, kept woman and a beautiful, virtuous girl, who both hope to win his affection. Unfortunately, Muishkin's very goodness seems to bring disaster to everyone he meets. The shocking denouement tragically reveals how, in a world obsessed with money, power, and sexual conquest, a sanatorium is the only place for a saint. This version of The Idiot is the translation by Eva Martin.

Fyodor Dostoevsky (1821-1881) was a Russian author whose best-known works include"Notes from the Underground," "Crime and Punishment," "The Idiot," and "The Brothers Karamazov."

Norman Dietz, a writer, an actor, and a solo performer, has recorded over 150 audiobooks, many of which have earned him awards from "AudioFile" magazine, the ALA, and "Publishers Weekly." Additionally, "AudioFile" named Norman one of the Best Voices of the Century.
or support indie stores by buying on
Copyright © 2020 American Booksellers Association