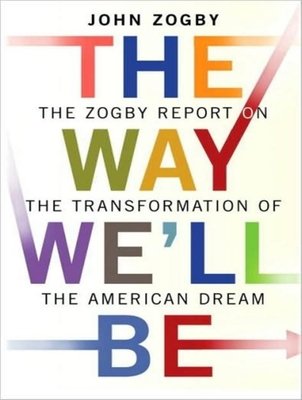 The Zogby Report on the Transformation of the American Dream

In this far-reaching examination of contemporary American culture, John Zogby, one of the nation's foremost pollsters, explores who today's Americans are, identifying patterns in our social makeup that hint at the way we'll be. Companies from multinational corporations down to family-owned small businesses can benefit from this detailed information about where we are and where we're going. Zogby gets to the bottom of this topic by doing what he does best: conducting and analyzing surveys. The conclusions outlined in The Way We'll Be are drawn from literally thousands of polls posed to the broadest possible cross-section of Americans since the 1960s. However, Zogby's complex research techniques are nowhere near as astounding as his conclusions: that the American Dream is in great transition-that a new American consensus is building. According to Zogby, four meta-movements are redefining what we want, what we expect of our leaders, and what we hope for: -We are learning to live with limits on everything-from the resources we consume to the exercise of national power abroad. -Led by the youngest adults, we are embracing diversity and redefining ourselves not by nationality but as world citizens. -Simultaneously, more and more of us are rejecting materialism and looking inward for guidance and sustenance. -We are demanding authenticity-in politicians, products, and our daily encounters-like never before. These are the plate tectonics of American society today, and they define us as much as opening the frontier defined early American settlers. They shape our national character. Zogby concludes his discussion of each movement with a list of "rules" for businesses looking to sell everything from automobiles to political candidates.

John Zogby is president and CEO of Zogby International and one of the foremost pollsters in America today. His clients include Reuters News Agency, NBC News, and the "New York Post," and his opinion pieces have been published in the "New York Times" and the "Wall Street Journal."

Reader of over four hundred audiobooks, Dick Hill has won three coveted Audie Awards and been nominated numerous times. He is also the recipient of several "AudioFile" Earphones Awards. "AudioFile" includes Dick on their prestigious list of Golden Voices.

Praise For Way We'll Be: The Zogby Report on the Transformation of the American Dream…

"Hill's gravelly voice draws the listener into the anecdotes that illuminate the lists of statistics and numbers." ---AudioFile