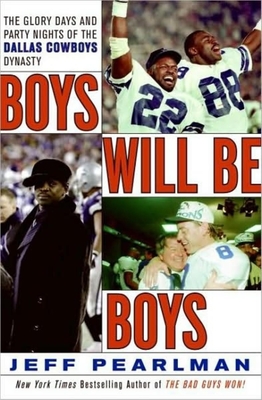 They were America's Team-the high-priced, high-glamour, high-flying Dallas Cowboys of the 1990s, who won three Super Bowls and made as many headlines off the field as on it. Led by Emmitt Smith, the charismatic Deion "Prime Time" Sanders, and Hall of Famers Troy Aikman and Michael Irvin, the Cowboys rank among the greatest of all NFL dynasties. In similar fashion to his New York Times bestseller The Bad Guys Won about the 1986 New York Mets, in Boys Will Be Boys, award-winning writer Jeff Pearlman chronicles the outrageous antics and dazzling talent of a team fueled by ego, sex, drugs-and unrivaled greatness. Rising from the ashes of a 1-15 season in 1989 to capture three Super Bowl trophies in four years, the Dallas Cowboys were guided by a swashbuckling, skirt-chasing, power-hungry owner, Jerry Jones, and his two eccentric, hard-living coaches, Jimmy Johnson and Barry Switzer. Together the three built a juggernaut that America loved and loathed. But for a team that was so dominant on Sundays, the Cowboys were often a dysfunctional circus the rest of the week. Irvin, nicknamed "The Playmaker," battled dual addictions to drugs and women. Charles Haley, the defensive colossus, presided over the team's infamous "White House," where the parties lasted late into the night and a steady stream of long-legged groupies came and went. And then there were Smith and Sanders, whose Texas-sized egos were eclipsed only by their record-breaking on-field performances. With an unforgettable cast of characters and a narrative as hard-hitting and fast-paced as the team itself, Boys Will Be Boys immortalizes the most beloved-and despised-dynasty in NFL history.

Praise For Boys Will Be Boys: The Glory Days and Party Nights of the Dallas Cowboys Dynasty…

Jeff Pearlman is a columnist for ESPN.com and the author of the "New York Times" bestseller "The Bad Guys Won!"

Arthur Morey has recorded over two hundred audiobooks in history, fiction, science, business, and religion, earning a number of "AudioFile" Earphones Awards and two Audie Award nominations. His plays and songs have been produced in New York, Chicago, and Milan, where he has also performed.
Loading...
or
Not Currently Available for Direct Purchase