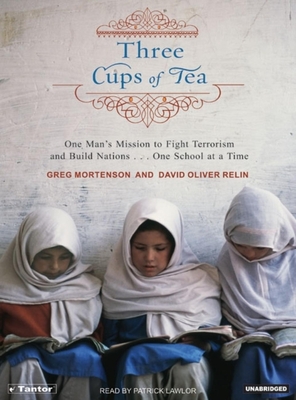 In 1993 Greg Mortenson was the exhausted survivor of a failed attempt to ascend K2, an American climbing bum wandering emaciated and lost through Pakistan's Karakoram Himalaya. After he was taken in and nursed back to health by the people of an impoverished Pakistani village, Mortenson promised to return one day and build them a school. From that rash, earnest promise grew one of the most incredible humanitarian campaigns of our time-Greg Mortenson's one-man mission to counteract extremism by building schools, especially for girls, throughout the breeding ground of the Taliban. Award-winning journalist David Oliver Relin has collaborated on this spellbinding account of Mortenson's incredible accomplishments in a region where Americans are often feared and hated. In pursuit of his goal, Mortenson has survived kidnapping, fatwas issued by enraged mullahs, repeated death threats, and wrenching separations from his wife and children. But his success speaks for itself. At last count, his Central Asia Institute had built fifty-five schools. Three Cups of Tea is at once an unforgettable adventure and the inspiring true story of how one man really is changing the world-one school at a time.

"A cliffhanger as well as a first-hand introduction to the people and places of a region little understood by most Americans." ---The Washington Times

Greg Mortenson is the director of the Central Asia Institute. A resident of Montana, he spends several months of the year in Pakistan and Afghanistan. David Oliver Relin is a contributing editor for "Parade Magazine" and "Skiing Magazine." He has won more than forty national awards for his work as a writer and editor.