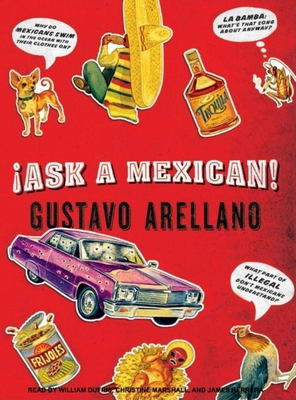 An irreverent, hilarious, and informative look at Mexican American culture is taken by a rising star in the alternative media, as well as a new kid on the block in such mainstream venues as NPR, the Los Angeles Times, Today, and The Colbert Report. Gustavo Arellano has compiled the best questions about Mexican Americans from readers of his Ask a Mexican column in California's OC Weekly and uses them to explore the clich's of lowriders, busboys, and housekeepers; drunks and scoundrels; heroes and celebrities; and most important, millions upon millions of law-abiding, patriotic American citizens and their illegal-immigrant cousins who represent some $600 billion in economic power.

Praise For Ask a Mexican…

"A welcome reprieve from common tiptoeing around the fraught subjects of race relations and immigration." ---Publishers Weekly

Journalist Gustavo Arellano is the creator and writer of the popular "Ask a Mexican!" column for the "OC Weekly" in Orange County, California.

Christine Marshall, an actress, director, and designer, won her first Earphones Award from "AudioFile" magazine for her work on "Dancer."

James Herrera spent many years working in the theater in New York City, but now enjoys his friends, his work, and the thriving arts community in Maine, where he now makes his home.
Loading...
or
Not Currently Available for Direct Purchase