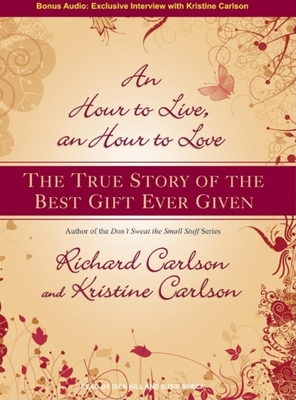 The True Story of the Best Gift Ever Given

Richard Carlson's Don't Sweat the Small Stuff series has been an incredible hit, with over 9 million copies of the original book and over 16 million copies of the entire series in print. Sadly, Richard died unexpectedly in December 2006 at the age of 45. Now Kristine Carlson has created an incredibly moving book in memory of her beloved husband, including Richard's love letter to Kristine on their eighteenth wedding anniversary. The letter answers the questions, "If you had one hour to live and could make just one phone call, who would it be to, what would you say, and why are you waiting?" Kristine responds to this letter in the second half of the book.

Reader of over four hundred audiobooks, Dick Hill has won three coveted Audie Awards and been nominated numerous times. He is also the recipient of several "AudioFile" Earphones Awards. "AudioFile" includes Dick on their prestigious list of Golden Voices.

Susie Breck is an Audie Award-winning narrator and director who lives and works with her husband, Dick Hill.
Loading...
or
Not Currently Available for Direct Purchase