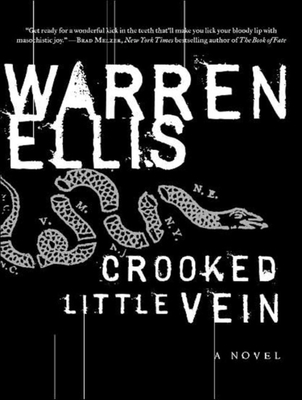 Michael McGill is a burned-out private detective who suddenly becomes enlisted by an army of presidential goons to retrieve the Constitution of the United States, but not the one we all know about. This would be the real Constitution (the one with invisible amendments) created by some of the Founding Fathers as a fallback for their great experiment. Along the way, McGill gains a polyamorous sidekick named Trix, gets scared to death by what men do with warm salty water, and descends into a world where crime, sex, and madness all seem to be the same thing. Full of mind-bending style and packed with a wild cast of characters, Crooked Little Vein infuses Robert B. Parker with Kurt Vonnegut and the madness of the graphic novel world. A surprisingly surreal treat, it will appeal to hardcore comic fans, mystery aficionados, and anybody looking for a riotous adventure.

"Even the more exotic characters of the novel [are] provided a quality and realistic voice that adds a deeper level of insanity to the individuals and the novel." ---Publishers Weekly Starred Audio Review

Warren Ellis is one of the most prolific graphic novelists in the world and the creator of such popular series as "Transmetropolitan" and "The Authority."